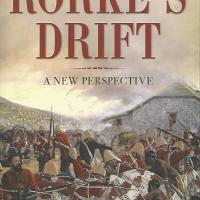 Neil Thornton’s book takes a fresh look at one of the most famous battles in British history, that being the battle that took place at Rorke’s Drift on January 22-23, 1879. Author Thornton indicates, in the book’s title, that it presents a new perspective to a very well-known and documented engagement.

Thornton puts forward a new narrative based upon a significant quantity of documentation, reasonable and logical conjecture upon some aspects of the defense of Rorke’s Drift, and in so doing, points to the conduct of John Chard VC, 5th Company Royal Engineers, as not only exemplary but one of the most important factors in the successful defense of the brief, but ferocious fighting between the Zulu army and the British Soldiers.

Thornton sets the scene by describing the decision made by Sir Bartle Frere that directly led to the engagement at Rorke’s Drift. In the following 180 pages Thornton uses eye-witness accounts to detail the decisions that led to the fortification of the buildings at the Drift, those decisions being made by the aforementioned Chard.

The description of the fighting is intense and very personal, fighting that was so close that the Zulu were grabbing the barrels and bayonets of the British soldiers with one hand while trying to employ their own weapons with the other.

Thornton describes how life and death decisions were made in the fortification of the compound, and how those decisions, time and again, proved to be the correct decisions allowed the British to successfully defend the Drift.

As one reads the book it becomes very difficult to put it down when one realizes that the 155 British troops held off a Zulu force of about 4,000, and that the fighting was hand-to-hand. There are familiar elements within, and other battles come to mind. The defense of the Alamo with the difference that it did not end well for the defenders, the fortification of Dorchester Heights in the American Revolution and how that fortification stymied the plans of the British Army, and the hand to hand fighting that highlighted the battle at the Wheat Field at Gettysburg in the American Civil War.

This book is highly recommended for its reliance on documentation and first-hand accounts, for the author’s captivating writing style, and for the excellent illustrations that help the reader to better picture the fighting in and around the compound.

Thanks to Casemate for making this book available to IPMS/USA for review.