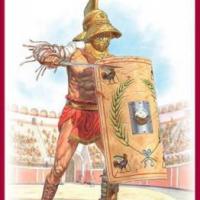 The latest release in MiniArt’s 1/16th historical figure series is this Roman Gladiator around the time of the 1st Century AD. There were many different classes and types of gladiator, each with specific weapons and armor, and this figure is a Mirmillo, a type of gladiator who was armed with a short sword called a Gladius and a large Imperial army-style shield called a Scutum. The Mirmillo gets his name from a type of fish – his helmet has a large crest like a fish’s dorsal fin. Supposedly, he was pitted against the Retarius, the “fisherman”, the guy with the net and trident. But it is believed he was more often up against other types of gladiators armed with short swords and heavy armor.

The box contains 42 gray plastic parts, a decal for the shield, and a nicely done sheet with painting and assembly instructions on one side and a parts map on the other. Detail is adequate, with very little flash. Facial detail is fair, but the face cannot be seen when the helmet is added. A few weeks ago, I reviewed the French Grenadier by MiniArt in this scale, and I was critical of the fit of some parts – thin connection points, and gaps that require lots of filling and sanding. The same problems exist with this figure, but having previously built 1/16th MiniArt figures, these problems were expected.

Since there is much bare flesh on this figure, care must be taken to ensure no seams show. The head and left arm attach to the torso, and it’s hard to get a clean join, so I had to use a lot of putty here. With the head, there is muscular detail on the neck and shoulders that may be damaged by sanding, so be careful there. Just a basic clean-up on the front of the neck is needed, since this area is hidden by the face mask on the helmet. Even after painting, I noticed a seam showing on the left shoulder, and had to sand this area and repaint it. The right arm is wrapped in cotton padding for protection, and it was hard to clean up; every time I examined it, I found new seams.

Sanding is necessary on the legs as well. The left lower leg is covered by the greave and padded cloth, so don’t worry too much about seams here. The greave and padding do not fit well on the lower leg, so I had to file away much of the calf to get these parts to fit. On the right leg, he wears a leather boot with exposed toes and heel. I did not see anything like this in my references; cotton padding or nothing would be more accurate, since gladiators usually were barefooted. The leg attaches to the boot at the knee, and a prominent seam is right in the front, so I cut out a small piece of thin plastic and made a tongue for the boot there. Then I made a knot for the bootlace from thin solder and super glued it in place. When the legs and feet were all assembled, the figure did not stand upright on its own, so I planned to put it on an uneven base to represent arena sand.

The crest did not fit well on the helmet and I wound up with a gap which, fortunately, is not easy to see. There are four unnumbered parts on sprue C. These are decorative pieces for the armor, and you can use them as I did, with two on the lower greave and two on the helmet.

Once assembly was completed and the extensive filling and sanding done, I gave the sub-assemblies a shot of white primer. I found a few places where seams were still visible, so I dealt with them and then shot a final hit of primer.

For painting, I planned to make the flesh dark, to represent a Mediterranean type figure, so I mixed some Testors Light Tan with Testors Rust. I mixed black with this dark flesh color for shading, picking out the muscle detail on the torso. I did paint the face, even though it can’t be seen. The holes on the face guard are small, as they were in real life, to prevent the Retarius’s trident from penetrating it.

For the armor, you have many options. Armor was usually bronze, an alloy of tin and copper, but it could also be iron, or plated in gold or tin. I chose to make the helmet bronze, and I found some inexpensive water-based craft bronze paint by Precious Metals that worked well. When I was done, the helmet was a nice copper color, and I used a dark brown wash on it. The bronze armor in pictures seems to have a gold finish, so I used some Antique Gold Rub ‘n Buff, which picked out the high spots and gave the helmet a nice gold look to it.

The loincloth, called a subligaculum, could be any color. I chose dark red, made from Testors red with black mixed in. The fringe on the bottom was done in yellow. The belt was painted black and drybrushed with silver paint. The padded cotton armor on right arm and left leg were painted off white, shaded with light gray and highlighted with white. The leather ties on the arm and greave were done in brown leather. The dangling tassels on the arm were painted separately and glued on later.

Shields were made of laminated wood covered with felt and leather, with a metal boss on the front and metal edging. On Imperial shields, the boss was iron, and the edging was brass- or gold-colored. The shield was certainly used as a weapon, to push the opponent off balance, and the round boss could be smashed against the opponent’s face. I wanted to make the shield look old and used, so I cut some sword slash marks on it with a file. I also wanted a color that would show off the decal, so I picked yellow. The back of the shield was done in flat brown. I gave the yellow a wash of brown around the edge to simulate dirt and maybe some rust from the iron edging. The boss and edging were painted a dark gun metal color. Prior to putting on the decal, I gave the shield a coat of clear gloss. The decal was very thin; I had cut a sample from the upper center and tested it. To avoid a problem, I cut the decal into two parts, the lower part with olive branches, red border, and roosters, and the upper part with red border and upper roosters. The decal snuggled down with no problem, no need for any setting solution. Then I gave it a shot of clear flat, and the boss and edging were highlighted with Silver Rub ‘n Buff. I finished the shield with a spatter of blood.

The base – previous MiniArt figures included a plastic base, but one is not in this box; the figure’s wide stance would not allow it to fit. As mentioned earlier, the figure did not stand by itself – probably my fault – so I needed a base for it. Rummaging through my box o’ bases, I found one that was the perfect size, made out of white marble, which had previously been used as a base for a trophy. I glued some shims for the feet and a piece to cover the hole for the trophy using my old favorite, 5 Minute Epoxy. When the lower half of the figure was ready, I used more epoxy to glue it to the shims. I filled the hollow feet with the glue, making a firm contact with the marble. After the glue had set, I added some groundwork to simulate arena sand, made from light sand-colored craft paint, white glue, and Celluclay. I can’t think of a better subject to be fixed to a marble base. It is heavy, but the figure can be easily picked up by the base.

I had left the top half of the figure off until the groundwork was completed. I glued the tassels to the right arm, then added the helmet. I dropped in the face piece of the helmet and used white glue on it. Using super glue gel, I fixed the shield to the crosspiece in his left hand, and finally the sword. The sword touches the shield! D’oh! I would have preferred it not to. However, warriors have banged their swords against shields throughout history to rattle their opponents, so I’m pretending that’s what’s happening…

When completed, the figure looks impressive. Anyone with the basic skills of filling and sanding can build a nice replica of one of these warriors of the arena. If you have an interest in ancient Rome, it is well worth the effort. Many thanks to both MRC and IPMS/USA for a great kit.

Blood on the sword
Previous Next