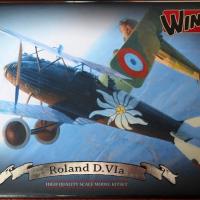 How to write a Wingnut Wings review:

Well, now that I have that over with, onto the specifics! The Roland D.VIa consists of 140 grey plastic parts, a choice of two clear windscreens; a small PE fret and three large decal sheets with lozenge in all of their multi-colored glory. The level of crisp detail is astounding, especially for such a newcomer to the field. The kit looks amazing in the box and previous reviewers have been lavish in their praise of the fit and engineering of Wingnut Wings kits. This would be my first Wingnut kit and when it comes to all of the hype – in the words of Madeline Kahn - “Its twue, its twue”!

Using the best instructions ever, construction started with the cockpit and interior framing. Not only do the parts fit correctly (so well you can literally construct the major pieces without glue and they’ll hold) the sequence and breakdown of the parts make detail painting easy and the inclusion of actual pictures of a museum Roland help to clarify placement and finish. Everything is there, from the empty belt box to the stretched canvas backing behind the seat (that is to be decaled with the lozenge scheme) even down to the rigging diagram for all of the connections to the control surfaces. I had heard that the tolerances are so tight that you have to be careful of paint buildup and take care to scrape of mating surfaces – this is absolutely true so plan ahead! Much of the cockpit is a pale green but there are enough wood surfaces that need specialized painting. There are numerous ways to simulate wood grain including:

Being fresh out of Emu hair, I opted for the dry brush method, using a clear orange overspray to give the wood a slightly reddish tone.

There are two engine options so take note of which decal version that you will be doing. The engine detail was as good if not better than the cockpit. That did not stop me from adding stretch sprue to simulate the ignition wiring and wire to simulate other odd details – the photos included in the best instructions ever were very helpful in this regard. I also added the wrapping over the manifold pipes using thin strips of Tamiya tape. After the engine was assembled, the fuselage was closed up and the upper fuselage deck was added – no putty required. Careful annealing of the PE cooling jacket for the machine guns helped me to roll them into tubes – but they are extremely fragile so be very careful handling them.

Assembly of the major components went quickly due to the engineering and fit of the parts. As suggested on the Wingnut website, I did add thin wire pins to the control surfaces to aid in final placement and positioning. I then primed all of the major components and planed out painting and masking. Because I am a big wuss, I decided to do the solid color fuselage with the edelweiss markings (who just had a flash memory of Christopher Plummer with a guitar?). The wings however, called for lozenge decaling. I was a bit apprehensive but I followed the best instructions ever and found that the process was much easier than I had thought. Planning and considering your sequence (as well as a good gloss coat) will go a long way in ensuring success. Even though the best instructions ever recommend against using setting solutions, I found that micro sol / set works well on those areas around the bumps and knobs on the wing surface. The rib tape followed after the base decals were dry including the tricky leading edges – make sure every step is completely dry before proceeding!

Once everything was decaled and over-coated with future to protect the decals from handling, the components were assembled. I had previously sent away for a set of eyelets and tubing from Bob’s Buckles (https://www.bobsbuckles.co.uk/), which are a godsend for modelers who don’t have the time or inclination to make their own. I pre-installed eyelets at all rigging attachment points prior to the wing assembly – again, planning is key. The wing struts and wings literally snapped into place (follow best instructions ever-their sequence works!) as did the landing gear and tail planes.

As indicated in thebest instructions eve , I used .15mm fishing line for all rigging. A word of wisdom here: if the fishing line says “invisible to fish” and “ultra clear” on the box – odds are you can’t see it either to thread the darn turnbuckles! I had ordered more eyelets and tubing than I needed to rig the Roland which was fortunate as the carpet monster became morbidly obese on all of the eyelets, tubing and fishing line that littered the floor. I followed Bob Booth’s instructions for making turnbuckles and drawing the rigging taut (https://www.bobsbuckles.co.uk/how_to_buckle.html) with about a 90% success rate. I managed to pop a few eyelets out of their holes and the turnbuckles in the middle of the rigging became special opportunities to experiment with creative profanity. Be careful of the landing gear as there is a bit of flex in the assembly – the addition of the rigging tightens it up but you may pop out the rigging if you tap the landing gear accidentally.

After all other loose assemblies were added; I then sprayed a flat coat (Polly Scale) that was not mixed all the way through, giving me a more eggshell finish with a slight sheen. I weathered the model carefully – only a bit of dry brushing and some sprayed earth tones around the wheels and under the wings.

I decided to use a Noch grass matt (model railroading product) that I had to make a summer meadow setting for the Roland. For display purposes I decided to leave one access panel off of the engine. Because I did not want to just leave the panel laying on the ground, I raided the spares box for a tarp, crate, toolbox and an oil can. They were all 1/35 scale but they look fine as is. I also found a couple of beer bottles to add because what is Germany without beer?

This was one of the more pleasurable builds that I have had in a long time, and enjoyable model to work on and the result is well worth the effort. My thanks to Wingnut Wings for the review kit!