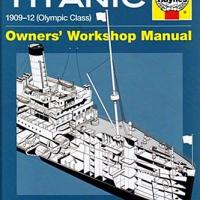 The story of Titanic is well known. Most are familiar with how the world’s most luxurious passenger liner struck an iceberg on her maiden voyage and sank taking over 1500 of her passengers and crew with her to the bottom of the Atlantic. Less has been detailed about how she was built, fitted out and operated!

Haynes is a company well known the world over for their quality and in-depth automotive repair manuals. Lately; they have branched out to include manuals on the Spitfire, Hurricane and Lancaster. Now they turn their attention to Titanic!

The book begins with a brief history of the ship, her maiden voyage and the tragedy that befell her. Included herein are many well known pictures of the ship and her passengers.

Chapter Two covers the anatomy of the ship. We are treated to many photos of the ship and her sisters Olympic and Britannic under construction. Many of these photos have not been seen for decades. All the parts of the ship are broken down here with discussion about how each was built and installed.

Chapter Three is devoted to the ships engines. We are given descriptions and information on how each part of the propulsion system fits and works together. Even diagrams of both the manual ash hoist and ash ejection system for when the ship is underway are covered.

Chapter Four has details about the ship’s lifeboats and systems for lowering them. A modern replica’s construction is shown in color photos as is the sole surviving Harland & Wolff built wooden lifeboat.

Chapter Five covers the bridge and it’s systems of communication and control. Additionally there is good information on the wireless equipment that would play so prominent a role on the night of the sinking.

Chapter Six is a brief overview of the Chief Engineer’s responsibilities and how the systems under his charge functioned and were maintained. There is also a discussion of how to repair plate and rivet damage.

The last chapter shows the ship as she exists today on the sea floor. Pictures of the hull and artifacts both in the sea and recovered are included.

I really enjoyed this book! It provides a look at aspects of the Titanic that have heretofore not really been covered in publication. Here is the only book that one will find information about the design, construction, operation and maintenance of the world’s most famous ship. The many long unseen photos are a great bonus to all Titanic and maritime history buffs. I can recommend this book to all who have an interest in the Titanic and her history. It will greatly appeal to those who share that interest more so than the modeler, but the modeler can find details within that will improve his model of the ship as well. Our thanks to Zenith Press for the review copy!