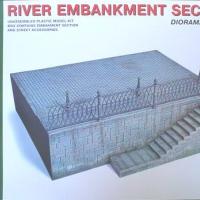 The MiniArt River Embankment Diorama Section consists of two sets of parts, some pieces being injection molded and some being vacuformed. The parts for the street surface, river embankment retaining wall, and access steps are vacuformed. The sidewalk railings, various street posts and stanchions, “park” benches and manhole covers are all injection molded. Each of the six part trees included in this kit are identical and each carries a manhole pipe casing and manhole cover, a storm grate frame and cover, parts for two sidewalk railing stanchions, and half of the parts required to build up a “park bench”. These parts provide the builder with all of the pieces to build up the street scene as shown on the box lid as well as extra parts so the builder can do a little free-lancing.

The vacuform parts are molded with a very convincing “rock” texture on the river retaining walls and steps, and a cobblestone texture on the surface of the street. The molded features of the rock and cobblestone surfaces are properly proportioned for a 1/35 scale scene. Because some of the parts are vacuformed some extra time studying the kit instructions is recommended so that the parts making up the steps, retaining wall, and street are properly assembled.

There is no “one right way” to build up this scene. One can forego the use of the steps entirely or one can locate them along the retaining wall at any location which is consistent with the gap in the street railings through which the steps would be accessed. The manhole pipe casing and cover can be inserted into the street at a location determined by the builder, as can the storm grate. And, of course, one can locate the bench on the sidewalk at any point as determined by the builder.

As a stand-alone diorama scene the only issue with this kit is the lack of a foundation upon which the retaining wall and street surface can be attached. Because there isn’t a foundation for the street included in the kit the first step in construction was the manufacture of such a base. I used pieces of sheet foam insulation to build a small box upon which the street and retaining wall could be attached. The foam box was assembled using a hot glue gun but the vacuformed street surface and retaining wall were attached using Elmer’s Carpenter glue. I was concerned that the heat from the hot glue would damage the vacuform pieces. Of course, it should be noted that the lack of a foundation isn’t a “negative” feature. Clearly MiniArt has designed all of their diorama structure and street scene kits to fit together. MiniArt recognizes that in order to incorporate multiple diorama scenes into one larger scene will require the builder to customize a foundation according to the needs of the project, thus making a foundation for this particular kit superfluous.

Side view of completed model
Previous Next