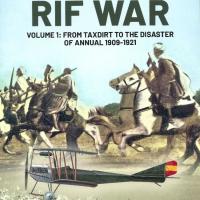 Javier Garcia de Gabiola, from Spain is a lawyer, and has published numerous articles and books related to legal issues. Always interested in military history, he also regularly contributes to various Spanish military history magazines, for which he has written more than 50 articles and has published multiple pieces with the Universidad Autónoma de México. This represents Javier Garcia de Gabiola’s third title with Helion & Company with his previous two books being Volume 1 and 2 of The Paulista War: The Last Civil War in Brazil, 1932.

Helion’s latest book in the Africa @ War series is a square back soft cover includes 82 gloss paper pages. The front cover features a colorized period photograph of Regulares cavalry charging (as Lieutenant Samaniego may have when El Mizzian was killed. The Tom Cooper color side profile of a Barron Flechas (a re-design of the Lohner Pfeilflieger) that can also be found on Page 32iii. The rear cover features a summary of this title and covers of other books in this series. I counted 146 black and white photographs, there are no color photos. There are also six aviation color side profiles by Tom Cooper four color illustrations of warriors by Anderson Subtil. There are 13 black and white maps and 1 full color map by Tom Cooper.

Javier Garcia de Gabiola kicks off with how Spain came to be in Morocco. Interestingly, the first photographs are of a very young Francisco Franco at ages 14 and 16 who would become a general at the end of the Rif War, and of course later the famous Spanish dictator. The Rif War was a battle between the local Berber tribes and the Spanish around the Rif Mountain range in northern Morocco. The Rif War was romanticized in books and movies about the Spanish Foreign Legion, and of course the French Foreign Legion (i.e., Beau Geste, but there are others). I can remember reading about Francisco Franco and his exploits in the Rif War due to a comedic line from Chevy Chase: “This breaking news just in: Generalissimo Francisco Franco is still dead” in reference to NBC News (as well as ABC and CBS) infatuation with Franco’s imminent death.

This first volume focuses on the timeframe of 1909 where much of the skirmishes and battles occurred on the north-eastern side of Mount Gourougou [Page 13] to 1921’s Spanish defeat at Annual. The 1909 conflict began with the Rif tribes attacking Spanish workers that were engaged in building bridges and railroads to access the iron mines. The local Berbers were quite effective and managed to cause over 1,000 casualties. Efforts to secure the surroundings of Mount Gourougou led into the battle of Taxdirt. Javier presents a detailed description of this cavalry battle on the plateau of Taxdirt with rare photographs showing the cavalry charge along with an Eduardo Banda painting.

Clearing Mount Gourougou led to a brief respite that saw the Spanish realize the importance of incorporating ‘friendly’ Berber tribes into the Spanish army. This was critical for the following Kert Campaign. Up to this point, the action presented was on the eastern end of Morocco. Chapter 4 addresses the western end of Morocco around Ceuta. Page 51 depicts the first plane that crossed the Strait of Gibraltar, from Morocco to Spainon February 14, 1914. Flying a Nieuport VI-M, Emillio Herrera flew to Tablada Seville to greet King Alphonso XIII, who was visiting Seville. This volume ends with the Disaster at Annual, Chapter 5. The Spanish Air Force before Annual on the eastern end of Morocco consisted of three Farman F-50s, eight Breguet XIV A.2s, and eight De Havilland DH.4 aircraft. Page 72 depicts a Breguet XIV mated with a Hispano-Suiz 8FB engine, considered far superior to the standard Fiat or Rolls Royce engined aircraft. You can also spy a DH-4 aircraft behind the soldiers carrying 12 Carbonit aviation bombs manufactured in Seville. The sections include:

I really enjoyed the detailed battle descriptions provided by Javier Garcia de Gabiola. Necessarily, there is a lot of detail to depict all the participants, but this is aided by the maps from Tom Cooper and the plethora of period photographs. The Berbers placed a premium on taking out opposing officers as quickly as they could in battle which led to many Spanish leaders since they continued to be killed. The Riffians were also adept in guerilla tactics which led to high casualty counts. I found it amazing how the Spaniards were able to sustain their losses early on, let alone the massacre at Annual where some 8,000 Spaniards lay dead and un-buried. One scenario during the Battle of Kert stood out where the Rifians were tossing cemetery crosses and stones at Spanish forces.

Javier Garcia de Gabiola has jammed a lot of information into this volume, but I still enjoyed the read and was able to finish it over three evenings. The period black and white photographs are all quite interesting and are well captioned. The color illustrations from Tom Cooper and Anderson Subtil are great [Page 34ii]. I’ve looked on the Helion website and Volume 2 is not being advertised yet, but I am looking forward to it. If you own any of the previous releases in the Helion @ War series, you know what you are getting. If this is your initial entry into this series, you will be pleased.