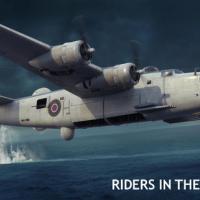 Eduard’s extensive new “Riders in the Sky 1944’ B-24 coastal command Liberator Special Edition comes packed to the gills with extras. Besides the two new sprues, photoetch, and standard Hasegawa B-24D kit. you get a book full of photos and information, though the wording in mine was in Czech(There is an English translation available in PDF format). You get an Eduard print of the cover image on the box that it all comes in.

The main kit here is the venerable B-24D by Hasegawa. IPMS/USA has reviewed the standard kit.

I’ll be reviewing the add-ons and modifications that Eduard has provided for this special edition. Unpacking the box, you will see the Hasegawa kit and then two new sprues, one in Eduard’s dark gray, and a new clear sprue for the multitude of rear turret options for the British Liberators. The gray sprue has most of the internals for the turrets, the rocket pods, rocket rails and rockets, and propellers for certain marking choices.

As for construction, you must choose right away which one of the thirteen marking options you’re doing because step 1 drills out the holes for the rocket pods, which are not found on every option. One word of warning is that you really need a micrometer for drilling out the holes for the pods and support braces. Eduard doesn’t provide a full-sized template to overlay on the fuselage but does include a diagram with exact millimeter measurements and these need to be followed exactly to assure correct fit and angle of the rocket pods. The rest of the first page is building the fuselage from the rear of the cockpit to the tail. Keep an eye on what guns go in the rear waist as they differ depending on markings as well. Some have large single guns, some have none, and some have dual gun mounts. Also add weight! I had read the original kit needs 90 grams ahead of the center of gravity, but I put 120 between engine nacelles and under the upper turret. That number seemed to work fine.

Page two adds all the photoetch to the cockpit (This is most of the photo etch fret). Once that’s done you build the forward fuselage, which is made entirely of clear parts. I recommend dipping all clear parts in Future before starting the build so you don’t have to worry about it later. Also, if you can I highly recommend getting the B-24D interior photoetch as well since the nose area is quite barren and will be seen through the large glass nose. Make sure you fill in the windows in the nose correctly as per the instructions, as this too depends on which variant you are doing. Speaking of nose glass, where you drill the hole for the nose gun and if you’ll need to drill a hole for the radar antenna will depend on the variant. So, lots of study of the directions is recommended before commencing work. Once the forward fuselage is together you attach it to the rear and hope for no steps or misalignment. I ended up with some where the fuselage meets the nose glass and where the cockpit roof matches the rest of the aircraft.

The next steps are building the horizontal and vertical stabilizers/rudders. I kept the rudders off until the end for easier painting. The end of the page adds more of the Eduard parts on the bottom of the aircraft, but again this can wait until just after painting so as to not knock them off during the rest of the build. Most of them are photoetch antennas that are placed in different spots depending on the variant. The next part of the directions is for the bomb bay. Eduard does make a Brassin bomb bay rocket launcher and that would look awesome, but for this version of the kit I just closed it up as there wasn’t all that much to see inside it anyway.

The wings are next in the build process and if you are doing a leigh light variant you’ll need to open holes in the right wing. The next few steps are the same as a normal Hasegawa kit. When the time came to build the landing gear I decided to splurge and purchase the Brassin wheels by Eduard as they look so much better than the kit wheels and help to give this kit even more life. They go onto the landing gear the same as the kit parts with very little fuss, just some minor resin clean-up and you may need to slightly open the gear holes for the gear leg.

Then it’s time to build the rear turret. There are differences between the variants so again pay attention. Most of the difference is in the “glass” parts used but the interior of the turret is basically the same. The last changes to the base kit are building the rocket pods themselves and making sure you have the correct propellers ready for paint depending on your version. Once all that is accomplished it’s on to painting and decaling.

I chose to go with option A out of the thirteen choices as it seemed to have the most use of the Eduard parts. This was a Mk.III aircraft and carried white undersides, sides, and extra dark sea gray upper surfaces. Some of the other choices have a cammo pattern for the wings and upper fuselage as well. First step was to use the supplied Eduard Mask set for the kit. It is a godsend for a bomber like this especially since the front of these B-24s are all glass. Once these were applied, paint was done using Tamiya White Primer for bottom and sides and Tamiya Grey Primer for the upper surfaces. A coat of XF-2 flat white was then used and when dry masked off for the upper surface. This was made using a mix of XF-24 Dark Gray, XF-2 Flat White, and XF-8 Flat Blue. Once I was satisfied with the outcome, an overall coat of Tamiya Gloss Clear was applied and it was on to decals.

The decal sheet is extensive as you can imagine with all the marking options but this is more due to the multitudes of stencils for you to use if you desire. Early and late stencils depending on the age of the aircraft as well as data markings, all of which are legible! They are made by Cartograf. The stencils went on well with just the slightest bit of MicroSet to help them along. The squadron codes went next along with the nose art. Again, nothing but glowing words can be said for the color, register, and thinness of the decals. This was one of the best sheets I’ve ever used. A final coat of MicroSol was added and the model was left to dry overnight. The next morning the aircraft received a final coat of Tamiya Flat Clear and it was on to final assembly

Final assembly consisted of adding multiple photoetch antennae and probes to the bottom, top, and sides of the aircraft along with fitting the propellers and wheels. These have different positions depending on which variant you are doing so pay attention to the directions. Once that was done all the masking was removed and some of the small fuselage windows were filled in with Testors PVA glue to simulate the window glass. The top and rear turret was added and this kit was done.

This kit is a great addition to the multitudes of B-24 variants out there. It is definitely one of the most unique and with the extra Brassin parts available you can make it even more so (see bomb bay rocket launcher). I highly recommend this kit and a huge thanks to Eduard and IPMS for giving me the opportunity to review it.