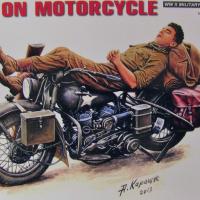 As the late Yogi Bera said, “it’s like déjà vu all over again.” In case you read my previous review on the MiniArt Harley Davidson WLA (kit 35080), some of this may look familiar as the kit includes the same motorcycle, but with a relaxed soldier onboard. The motorcycle and rider are both rendered well in this kit, which will add a unique model for those interested in a World War II motorcycle with a distinctive figure. Although I would recommend the motorcycle to more experienced builders, the kit is very nice overall once constructed, and will look great in any collection.

Developed in 1940 by Harley-Davidson, the WLA model motorcycle was designed for use by the Army, and by the end of the war, over 90,000 bikes were produced. With its 3 3/8 gallon gas tank, the bike could travel 100 miles, and could attain a speed of 65 mph. The motorcycle had a two-cylinder, V-type L-head engine that was air cooled, and its overall weight was 540 pounds without a rider or armament. The overall length of the bike measured 7 feet 4 inches, with a handlebar width of 3 feet 5 inches, and the wheelbase was 4 feet 11 ½ inches. The skid plate allowed the bike to clear four-inch obstacles, and the carburetor allowed fording of water up to eighteen inches deep. A sidecar was not typically used with this bike, as was common for the Germans, and they were mostly used for scouting, courier duties, police/escort work, and light transportation. The WLA was nicknamed the “Liberator” as soldiers were seen riding them in countries that they liberated from Germany during the Second World War.

Upon opening the box, the modeler will find two gray sprues, one clear parts sprue, a photoetch fret, decals, and instructions. Amazingly, there are 118 parts for this motorcycle (91 in gray plastic, three in clear plastic, and 34 photo etched), which is impressive for a finished model of this size. Take note that five of the gray parts are used to form the photo etched spokes and front wheel support brackets for the ammunition box and gun. The additional sprue in this release holds the figure (seven parts in all), tarp, helmet, and jacket. The gray plastic is somewhat brittle, but it takes paint with no issues, and the clear parts are nice and transparent with no deficiencies to mention. The brass parts on the photo etch fret were thicker than the ones I dealt with in the original release, which made forming them a little more of a challenge. The decal sheet allows the modeler to represent one of two WLA’s, but no information on where the different motorcycles were actually used is provided.

This is my third MiniArt kit review, and like my previous experience, the kit went together fairly well overall, but my sample had a broken frame (part A72), which led to some challenges during the build as I did not set the angles correctly the first time. The drive chain looks very convincing, and the tread pattern on the tires is spot on with the real tires used on the production motorcycles. I did not require the use of any filler or surfacer on the assemblies themselves, but I chose to fill in the backsides of the ammunition box and saddlebags to enhance their appearance. There are also some very small items molded as separate pieces (such as the shifter knob), and they require great care when installing.

Whether by luck, or memory of my original motorcycle build, construction went well with the bike itself. I did manage to launch a couple of the photoetch bolt heads (part PE 20) for the underside of the gas tank, but only I will know that they are missing. Alignment of the parts is reasonably shown in the directions, but I did go to look at reference photographs a few times, just to play things safe. The figure took a little work to get correct as the directions only show a single view of the left side of the reclined rider and his jacket with the tarp and helmet hidden. I loosely glued the tarp to the jacket, and then slid in the helmet to adjust the angle between the two items. I built the bike first so that I could fit the figure better, which did help.

As far as my hits for this kit, I would again have to mention the overall level of detail in the parts. This builds up to a very nice representation of the Harley-Davidson WLA right out of the box, and cleanup of the parts was minimal. The included photo etched parts help to enhance the realism, especially with the spokes, but also makes the front mounting brackets look more convincing. The decals look accurate for the speedometer and manufacturers plate with silver and black ink being used. The napping soldier is a big hit for me, and the detail was as good as I would expect for any plastic figure.

As far as my misses are concerned, as with my previous review of the motorcycle, in step 29, when assembling the right side mounting bracket, part PE 6 will actually be used, but the directions would have you use PE 5, which was used on the left side bracket in the previous step. There was no alignment point on part PE 3 to attach part PE 5, although one is shown in the directions in step 28. In addition, as I mentioned previously, the directions for the items the figure is laying on are not well shown. One small point of contention is that I believe the Thompson machine gun in the scabbard is a little thin in its overall width, as compared to a real gun.

I finished my WLA using Gunze acrylic Olive Drab (H78) for the frame and gas tank, Andrea acrylic Leather for the base and Winsor & Newton Burnt Sienna oil paint (for all leather items), and Vallejo Dark Rubber for the tires. The engine was painted with Vallejo Oily Steel and Natural Steel, while the gun received Gray Gunmetal and Leather Belt. The figure was painted with base colors of Lifecolor UA 419, Olive Drab Light Mustard, and UA 422, Wool Olive Drab (1943), as well as Andrea Dark Leather and Brown Leather. The flesh colors came from the Vallejo Flesh paint set. The decals reacted just fine to Micro Set and Micro Sol directly onto the Gunze paint (as it dries to a semi-gloss luster), and I coated the motorcycle with Alclad II Matte Finish to seal everything.

In conclusion, I would highly recommend this kit to anyone interested in adding a 1/35 scale Harley-Davidson WLA to his or her collection, especially with the unique figure. The kit is recommended for folks 14 years and older by MiniArt, and I would confirm that, especially when dealing with the thin PE parts of the kit, and some very small detail items (in both plastic and brass). With the only other option of a well-made kit of this subject being the 1/9 scale Esci/Italeri release, this model will certainly take up less display space.

Top with rider
Previous Next