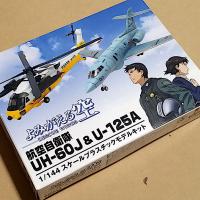 Rescue Wings is a Japanese anime cartoon known for its realistic portrayal of the Japan Air Self Defense Force’s (JASDF) Air Rescue Wing, in particular the Komatsu Rescue Squadron. The basic plot involves a helicopter pilot’s (2nd Lieutenant Uchida Kazuhiro) assignment to the JASDF Komatsu Air Base. This initial series ran for 12 episodes (an additional episode added to the DVD release) and was followed by two manga series and a live-action film. They were created with the full cooperation of the Air Rescue Wing.

This fixed wing aircraft is based on the British Aerospace’s twin-engine Bae 125-800 private jet. These aircraft are modified for the search-and-rescue with large observation windows, a marker flare ejection system, a droppable liferaft, and an emergency equipment dropping system.

The kit consists of 30 parts molded in light grey plastic. There are 13 more parts that are not used in assembling the kit. My kit was flash-free, and the panel lines are crisply molded. While the instructions are in Japanese, they make it easy to assemble with good diagrams.

Assembly began with the cockpit by installing a two-seat part. Be careful when installing the clear fuselage windows – I did not notice a fit issue until it was too late (there is some trimming involved). The fuselage was next, and once that was dry the rest of the assembly went rather fast. There is a rectangular hole in the bottom of the aircraft that appears to be for a base that is not included. This can be filled and sanded.

Painting was straightforward – the aircraft is mostly Air Superiority Blue with Duck Egg Blue on bottom (I used Testors 1161 Sky Blue and Testors Model Master FS35622). The decals went on without a problem and reacted well to a setting solution.

The UH-60J helicopter is a development of the Sikorsky UH-60A helicopter of the U.S. Army. Built by Mitsubishi, it is outfitted specifically for the air-sea rescue role.

This kit contains 26 pieces, all molded in clear plastic. My sample came with one bent rotor blade, and I broke it while bending it back. One of the difficulties that I ran into with the kit is the clear plastic – it makes it harder to see some parts and hard to see joints and seams.

Assembly began by putting together the rotor hub and the cockpit (I painted mine black) and then putting the fuselage halves together. The front of the helicopter is separate and creates a difficult to blend seam just behind the cockpit doors. Most of the rest of the kit went together without any problems, the notable exception being the main rotor assembly to the fuselage assembly. It was difficult to install, and I believe there may be a slightly out of round part.

Painting was fairly straightforward – gloss white over gloss yellow. The yellow I used was Testors Model Master FS 13538. Masking can be time consuming, and the cabin windows are apparently meant to be painted over, as I did on my sample. There are decals for the black areas on the front and top of the fuselage, and in retrospect I would have avoided painting these areas. I cut cabin windows from a sheet of black decal.

Decals went on and snuggled down with excellent results using a decal set solution. One fit problem I encountered was with the tail rotor blade warning stripe decals – they will only cover the front and part of the back of the blade.

Overall, both of these kits build up to nice replicas of the actual aircraft. The issues that I ran into are relatively minor and are easily fixed. I would recommend this kit(s).

Special thanks go out to Platz Hobby for providing the sample kit.

U-125 Finished right side