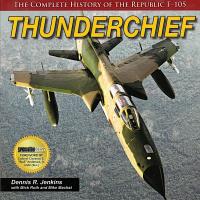 The Republic F-105 Thunderchief was designed to deliver a tactical nuclear weapon against the Soviet Union during the Cold War. However, it gained it’s fame over the jungles of Vietnam where they flew 159,795 combat missions from which 334 failed to return home.

This hard cover book contains 300 pages and 575 pictures in black and white and color. It covers the full history of the plane from preliminary designs and competitors through the Vietnam War, and ending with the Thud Out which was flown at Hill AFB, Utah, about 45 minutes north of me.

The chapters are broken down mainly by version with Chapter One covering the development and the YF-105A. Chapter Two takes a look at the initial Production version, the B model, and it’s brief usage by the Thunderbirds. Chapter Three covers the D/F versions which leads to the war in Vietnam in Chapter Four. Chapter Five covers the Wild Weasel versions with the last chapter looking at the Airframe and Systems. The Thud Out is covered in the Epilogue and there are 3 Appendices which contain a Serial Number List, Loss List and finally Notes and Citations.

The book does a good job covering the Thud with lots of information and some great pics. For the history buff you get the whole story only missing pilot anecdotes. For the model builder there are great detail pictures including cockpit and weapon options. Some great pictures with paint scheme and diorama possibilities and some detailed drawings though there are no scale plans or profiles.

For me the details in the combat section were my main focus and there was lots of interesting information including a list of the 27.5 kills the 105 recorded, including the first kill of the new 20mm Vulcan cannon. Details regarding the different campaigns the Thud flew in and the defenses it faced, including the SA-2 SAM system, bring a sense of what the pilots had to endure in this long, frustrating war.

If you are interested in the F-105 this is a great book to pick up.

Thanks to Specialty Press and IPMS/USA for the review sample.