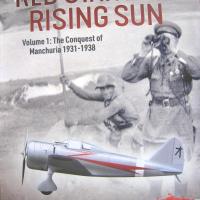 The book deals with the conflict between the Chinese territory, Manchuria, and the Russians and Japanese, who wanted to control it. Manchuria is located northwest of Korea, and northwest of China. During the 19th Century, there were enough natural resources that Manchuria would have been a desirable colony for wither nation, and both sides attempted to settle populations and construct industries and communications systems. Most of the military operations were centered around the rail networks until the early 20th Century, when automotive technology was developed.

The book provides a detailed account of the conflict between Tsarist Russia (later the Communist Soviet Union), and the Japanese Empire, also taking into account the various segments of the Chinese government which were in control of some of China. Japan has already sent its armies into China, and the Russians varies in their actions, depending upon who was in control in Moscow.

The author goes into considerable detail explaining the aspirations of the various participants, and the actions of the leaders and commanders in attempting to achieve their objectives. It is truly a historical work, with explanations of the objectives of the Russians and Japanese, and detailed explanations of the weapons systems used at the various times, and the results of the conflicts between the warring powers. The author does a good job of explaining the effects in Russia of the Communist Revolution in 1917, and resultant purges of the military, which certainly affected the outcomes of some of the battles. Also, the development of military technology are discussed in detail, showing how they affected the balance of power in the region.

The illustrations are mainly photographs taken during the times in question, and the only thing the authors could have done to add to the effectiveness would have been to include more maps showing the geographical factors. At the beginning of the book is a small map showing China and its neighbors, and later in the book is s detailed map of the site of the Battle of Lake Khasan, between the Soviets and the Japanese, which occurred somewhere in Manchuria from July to August, 1938. There are numerous references to locations during this battle, but many of the references are not identified on the map, and even the location of the battle site is left a mystery.

This book is very well written, and gives a good account of a conflict that is not often written about. It is interesting and informative reading, and the illustrations are very effective, especially of the military equipment. It will fill a gap in your historical reading library. Vol. 2 should provide the rest of the story. Get a copy of this one.

Thanks to Helion & Company, Bill O’Malley, and Phil Peterson for the review copy.