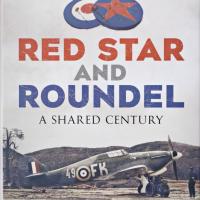 Philip Wilkinson has written a tome on a topic seldom seen – Anglo-Russian air force togetherness from before the First World War to a few years ago. This book contains a wealth of historical information that is very difficult to find, along with a first-hand view of military cooperation (or not) by the author. Mr. Wilkinson served in the RAF and thus this book is chiefly concerned with British airpower and its changes through war and peace. His perspective and insights are many and astute. If you are looking for technical details or operational histories, this is not the right book. If you want to know the highlights of RAF-Russian interactions from an RAF viewpoint, this is the right book.

A 7 X 10-inch hardcover book 1.5 inches thick with 10.5 font written in British English (not American English). A short foreword by Air Chief Marshal Sir John Cheshire KBE CB KStJ precedes the Preface and then 31 Chapters with short Endnotes and Bibliography at the end of the book. In the middle of Chapter 19 between pages 192-193 there are 16 pages of figures, illustrations and photographs (B&W and color) running the gamut of the timeframe of this book. Half of the images are of people the author dealt with and half are of historical interest.

As Philip Wilkinson explains, he wanted this book to be a window on a little-known part of recent history that he experienced with enough background to keep perspective on world events. He focuses on the men and women of the Royal Air Force (and its precursors) who dealt with Soviet Union from WW1 to almost present day. Much of the text is pulled from memoirs, diaries, and letters – on the spot reporting. His personal experiences are the shortest part of the book, but brings the reader up to date with how the RAF interacted with Russia as allies, antagonists, allies, Cold War antagonists and then allies again. He purposefully did not have copious footnotes and references, but he does quote many official documents that provide rationale for the comings and goings of history and his experiences.

This book is not focused on my modeling interests (1/700 WW2 ships), and is a willing departure from my technical or naval book reviews. This is a well-written, well-researched, and well-flowing book that has inside information on events that greatly affected all of us reading this review. If you wanted to know more about Russia, Soviet Russia, and afterwards, this is one place to get eyewitness accounts.

To give you an idea of why this rather large book is worth a read, I will briefly cover the main topics – you the reader will reap the rewards of his findings and interpretations. The first three chapters cover the birth of the RAF before and during WW1, although this book does not delve into that conflict. Chapters 4-13 are concerned with the “action” in Russia near and after the end of WW1 – a forgotten but very important time that determined where the world is today. British air forces were in northern Russia from mid-1918 to mid-1920, at first to prevent the Germans from ransacking Russian weapon troves but which quickly morphed into an undeclared, anti-Bolshevik (Soviet) war at a time when everyone except the Bolsheviks were trying not to fight. Needless to say, the reader will learn why the Bolsheviks prevailed against the White Russians and the dwindling backing of the British. Air power is the main focus, and you are put into the cockpits and observers’ seats.

At the same time, British efforts to control Bolshevism in South Russia is covered in Chapters 14-16, roaming around the Caspian and Black Seas, and the Caucasus region. Again, another forlorn theatre that only stemmed the Red tide briefly – a failed campaign. Chapter 17 concerns the air force in the Baltic theatre, which was mostly naval and ground forces. Same story – no matter how the air force performed, it was not enough to win a limited action against a determined foe (sound like Déjà vu?). There are lessons buried in these chronicles of carrying on. Chapter 18 is a short synopsis of the interwar years 1921 to 1941, with little to discuss. Half the book is concerned with pre-WW2 activity.

Chapters 19-26 concern the larger and much friendlier role that British air power played for and with the Soviets in WW2. From Hurricanes, Hampdens, Airacobras, Lancasters and Spitfires, the reader is placed into the shoes of British airmen who flew, trained and supplied the Soviet air force on a massive level little appreciated today. The roles of RAF liaison staff in the Soviet Union were detailed, and help explain events after WW2.

Just as fast as the Soviets became allies, they once again were antagonists, as exemplified by the Berlin airlift and immediate post-WW2 occurrences as shown in Chapter 27. Since there was no presence of the RAF in Soviet lands, Chapters 28 & 29 focus on RAF Gatow, the British airfield in Berlin, and take us through the Cold War and the fall of the Soviet Union. The author’s experiences enter in this timeframe, discussing arms limitation talks, flying spy missions, and treaties. The ending of RAF activity in Berlin after the Wall fell is seen through the eyes of the RAF team on the ground. In Chapter 30, the author then joins the British military presence in Moscow and gives an eyewitness account of the changing regimes after Gorbachev, and of relationships built that last to this day after his retirement. Finally, Chapter 31 gives a brief update to 2012, focusing on joint amity ending up with medals and how some of the RAF personnel fighting the Bolsheviks ended their careers.

When I chose this book to review, I was worried that in doing my Reviewer Corps duty I might be using my time on something that was not anticipated or welcome. All those thoughts quickly banished when I realized the author had many stories to tell about a century of history that most of us have lived through the latter part. The forgotten campaigns were exposed on a personal level, something we do not normally get. We learn a lot about the Russian and Soviet psyche, and world news becomes less opaque and more understandable. Filling in these forgotten and invisible areas of military history makes this book worthwhile. But the real beauty of this rather lengthy book is to see how people perform in situations they would not have chosen. There are many entertaining vignettes of those life moments we all have that make rote and dreary lives more bearable. Philip Wilkinson won me over with details, humanity, and behind-the-scenes wisdom. You will not regret reading this book, and it is a perfect companion if you have time on your hands to be educated, informed, and entertained the old-fashioned way – with a good book. Recommended for flyers and military history buffs of all kinds, and all those who love a good yarn.