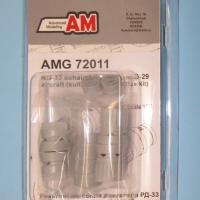 There is a new player in the Aircraft aftermarket world, and they hail from Russia: Advance Modeling. I had not heard of them till they appeared on the IPMS Reviewer list and I thought I would try out their resin exhaust nozzle set for the new Zvezda MiG-29 (9-13). The resin used is a light gray color, captures very fine details, and is easy to cut using a razor saw or equivalent. The package is simple but effective, with parts in clear bags held within a plastic shell that, when a single staple is removed, is hinged at the other end and opens up like an oyster. The instruction sheet is in English and Russian, and unfolds with easy to understand and follow graphics.

Each exhaust nozzle is comprised of four parts, with each piece needing to be removed from it's pouring sprue with a razor saw. After which, the cut area just needs a few swipes with a sanding stick to clear up the joint. Before assembling the parts I would recommend that now would be the time to paint the interior, as it's easy to access the interior on each component. Once the paint dried, I used some CA adhesive to bond the resin parts together. It's that simple.

I noticed two things with the Zvezda MiG-29 nozzles. First, when you glue the two large pieces together (parts C2 and C3), the combined part has a downward angle of about 5 degrees, and secondly there is a notch at the back to fit into a corresponding location on the fuselage. The Advanced Modeling parts when assembled will have the same downward angle and has the same notch as the kit's part, so it really is tailored to fit the Zvezda kit.

The Zvezda kit is a very fine model of the MiG-29 (9-13) Fulcum, and if you want to add some extra detail I can highly recommend the Advanced Modeling exhaust nozzle set AMG72011. With some painting and dry brushing, the superior details on the resin nozzles will really pop. So far I only know of one hobby business that sells this line in the States, and that's Victory Models (https://www.victorymodels.com/) . They only carry some of the line, and so far not any of the aircraft nozzles, but that may change. Perhaps more businesses will pick up on this company's products and sell them.

I want to thank Advanced Modeling and IPMS/USA for allowing me to do this review.

Nozzle on left and the notch visible on right