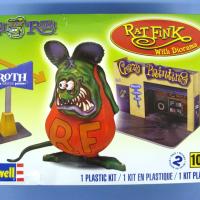 Mention the Rat Fink and any car enthusiast, or fan of 60’s Kustom Kulture, will immediately think of Ed “Big Daddy” Roth’s infamous anti-hero to Mickey Mouse. Revell originally issued the Rat Fink kit character in the early/mid 60’s and has seen fit to reissue the kit again.

The kit in itself is very simple and comprised of 7 pieces. A front and back half of the the body, two feet, a tail, a base, and a nose. The rest of the box contains an instruction sheet and a cardboard diorama. The first thing I did was assemble the diorama backdrop by folding the various pieces and inserting tab A in to slots B etc. with a bit of white glue where needed. The Roth arrow road sign goes together well and quite easily. The garage was comprised of several pieces and goes together with the assistance of a bit of clear tape and glue. Fitting the back to front and the roof was not difficult, but trying not to crush the structure while assembling everything was the challenge. To be quite honest, the $25 price tag for this kit is high in my opinion and could be in the $15.00 range. Adding the Rat Fink sprue to the Outlaw, or other Ed Roth subject, and making it a double kit for a few dollars more would be another route to go. What better than to have the Rat Fink standing next to it’s creator’s ride?

Test fitting the body halves revealed that the alignment was fairly good, but there was a noticeable gap with the top of the head section. After several attempts at gluing and clamping the top of the head without success (gap kept opening), I resolved the issue by heating an Xacto knife with a lighter and just melting the plastic together at the hair seem between the ears and blending it in. After leveling the seams around the body, I attached the nose, feet, and tail and primed it.

This kit was made in the 60’s so there isn’t a whole lot of detail to the figure to start, and some has been lost through the years in the molding process. To bring the Rat Fink to life, I relied on my artistic ability and a variety of painting techniques. First I printed a picture of the Rat Fink as a reference. Starting out with a white base over gray primer, I topped the white with yellow. I chose yellow as it provides a great base to paint green and red over and make them pop, while creating the signature RF on the shirt. After my base coats were down with red and green, I proceeded to employ a variety of miniature brush-painting techniques such as layering, wet-blending, and glazing, as well as airbrush techniques, to give the rat more life and definition. The first consideration was light source, which like the original artwork, I directed from the top as light is normally. After a variety of color shades, washes, and a final shading using the airbrush, I was happy with how the whole model looked.

The Rat Fink is not really a model to build, but more so a model to paint. The simplicity of the kit lends itself to a good father-son project, or something new for the experienced modeler to try their hands at figure painting. On a side note, the fit issue with the head may have just been an issue with my review kit sample. Thank you to Revell for supplying the review sample, and for also reissuing an iconic subject of the kustom kulture!

Rat from Top
Previous Next