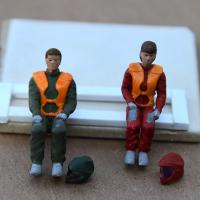 Cozmic Scale Models has created a set of Raptor Pilots in 32nd scale that can be used to “crew” a Battlestar Galactica Raptor. There are two sets of the Raptor pilot figures, one with the crew wearing their flight helmets, and the set being reviewed, not wearing their helmets. The helmets are, however included in this set. It is not intended to have these two figures wearing their headgear, and in fact, the helmets cannot be placed on the figures unless some surgery is done to the helmets. No worries, though. There is a set of these figures, with helmets being worn, if that is your interest.

The figures are cast in resin, each figure being a single piece. There are no seams that need to be filled and no flash to be removed. The casting has a considerable amount of detail. The faces feature eyes that have detail showing the sciera, and enough detail to locate the iris. Then, of course, one can add the pupils and the upper and lower eye lids. It appears that both figures are wearing flight gloves.

One figure is male, and the other is female. This is an assumption based upon the length of the hair on both figures, and the hint of a bosom on one figure but not the other.

Due to the lack of any seam work or flash, one can give the figures a “bath” and quickly begin the painting process. The flight suits and the flight vests have sufficient detail to add shadows and highlights. The set of figures comes with decals, but I did not put the decals on either figure. One of the decals was “tested” and applied to a piece of sheet styrene and it adhered nicely with no issues. Please note that the paint scheme used on these figures is not based on any of the BSG episodes.

A fascinating feature of these figure sets is that they can be reproduced in any scale. If you have a favorite scale you are invited to contact Cozmic Models for a quote. The figures are produced by Toy Cave Collectibles and Cozmic Scale Models. Total work time on the figures was just under two hours, with most of that time waiting for the paint to dry.

The figures require no assembly and are ready to paint as soon as they are given a quick wash. The detail is considerable for figures in 32nd scale and help to add shadowing and highlighting during the painting process. The helmets cannot be “worn” by the figures but can add detail to any scene in which the figures are placed. I noted that there is no clear visor part for the helmets, but that can be scratch-built with ease.

Helmets on
Previous Next