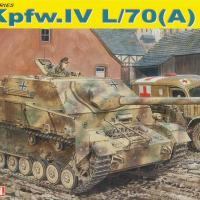 Upon receiving this kit in the mail, I looked over the artwork on the box top to see which paint scheme I thought would be cool to do. I noticed a camouflaged scheme that had a blue pattern. Immediately, I questioned the blue color. I checked the instructions and yes, there it was – sky blue color callouts. The other thing that I noticed, aside from the standard Dragon instruction, was there were nice decals, 23 grey sprues, 2 clear sprues, a PE fret, and 2 bags of magic tracks. The instructions show quite a few sprues with the majority of unused parts (which I included pictures of). I was still wondering a few days later which scheme to do. I was really intrigued by the sky blue scheme. At this point, I decided to post on Hyper scale about its validity. Tom Cockle, one of the technical consultants for this kit, shot me a reply saying no, it was a fake, and added this kit was missing a sprue C. Upon this, I contacted Dragon care and finally got my part around New Years. Well, first look at this kit says lots of old Shanghai sprues with newer ones added.

During construction, I ran into a few problems but managed to get through them. Here is what I found in the steps.

That pretty much sums up construction of this kit. The only thing left was painting, and I still have not decided. Fast forward 3 weeks – I just said, what the heck, I’ll do a 3-tone camo. I hit the entire model with Tamiya XF60, then used Vallejo dark rubber and oily steel on the road wheels. I used incredible white mask liquid frisket to make dots on the yellow background. Then I used Tamiya XF61 dark green and XF64 dark brown to create thick stripes. Then, once the colors were dry to the touch, I peeled off the dots to gets my desired effect. I thought this kit would look good without decals, so I didn’t add them. No weathering will be done at this time. I want to try out some new AK interactive products on it to get it to a show in March.

I would like to recommend this kit if you want a good looking PZ L/70(A) in your collection. Just study the instructions before you build.

I would like to thank Dragon Models USA and IPMS-USA for the opportunity to review this kit, and you for reading it.