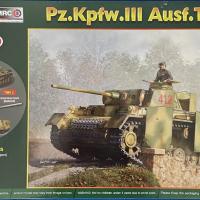 Who is Gallery Models?

The following statement was sent to me by a Model Rectifier Corporation (MRC) representative upon requesting a short synopsis of who Gallery Models is, "Gallery Models is a concept developed by Model Rectifier Corporation (MRC). The first model was developed in 2009 together with prominent designers, artists, mold-makers, historians, and modelers. The central idea propelling Gallery Models is to select subjects that will challenge the hobbyist’s imagination and building skills while providing detail and enormous intrinsic kit value. Gallery’s selection includes helicopters, armor, and ships."

The Pz. Kpfw.III (Panzerkampfwagen III - Panzer) or official designation Sd.Kfz. 141  was a German medium tank developed in the mid-1930s that was armed with cannon firing armor-piercing shells and machine guns for infantry support. The Panzer III consisted of different series ranging from A to N with additional variations. There were approximately 4,358 of the Ausf. J-N series built by different manufacturers between 1941 and 1942. The J series had an improvement in armor plates on the hull front and sides along with a thickened mantlet. The L and M series were armed with the L/60 50mm gun as opposed to the 50mm L/42mm with the earlier J series. The side visors and loader’s vision ports were eliminated on most of the L & M series. Wading capabilities were added to the M series in 1943 and Schüzen or armored sides were added. For an in-depth discussion of the differences see the references provided or the numerous books written about the Panzer III.

Gallery models, with this new kit, provides the modeler with the options to build either options J, L, or M.

My first impression when I received the kit was WOW! The box measures a whopping 22” (559mm) x 13.75” (349mm) x 6’ (152mm). It comes in a thick cardboard box with security seals on both sides. On the front is a beautifully painted picture of a Pz.Kpfw.III M with armor skirts (Schürzen). On the side panel are images of three versions the modeler can build, Type J, L, or M.

One painting and markings guide in color with a paint reference chart for Mr. Hobby, Acrysion, Vallejo, Model Master, Tamiya, and Humbrol paints.

Two upper hulls each in plastic bags clearly marked for the version to use. Both hulls are nicely detailed. One marked for the Type J & L, and one marked for the Type M & L. The Type J upper hull measures 10.5” (267mm) in length and 4.5” (114mm) wide. Not being a rivet counter, I wanted to measure the thickness of the side hull in a 1/16th scale to the reference dimensions. References have the upper side hull as 30mm thick. Measuring the kit hull and converting it to a 1/16th scale the actual measurements came out to be 32mm thick.

One baggie containing the turret and turret stowage box. The turret has weld beads molded on and the stowage box has bolt and rivet heads present.

This kit by Gallery Models looks to be an excellent base model to build one of three versions of the iconic Panzer III in a large scale. Inspections of the sprues did not reveal any mold shift or flash. Sink marks are located on the inner sides. Parts attachment points on the sprues are in areas that can be sanded easily. I look forward to the next step in deciding which version to build.

References used for this review include:

Thanks to IPMS/USA and MRC for allowing me to review this kit.