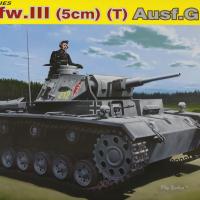 This is my first Dragon Pz. III build and my overall impression of the kit is very favorable. The parts are very well molded with fine, delicate detail and no flash to speak of… almost. I found only a few small fit and engineering issues that take away from the overall build experience. In general the kit builds up like any other newer Dragon armor kit. The other thing I noticed was a bunch of parts. However, you will notice that nearly half of them are not used in this version of the Pz. III.

The Hull comes with no interior detail other than the hull mounted MG and the torsion bars for the suspension. With an aftermarket interior, you wouldn’t see much if any of the bars anyhow. The turret does have some detail, but it is limited to the gun breech, spent shell basket, commander’s step / seat and the interior portion of vision slits.

No individual magic tracks are provided, the DS track (rubber band style) is you’re only in box option. My tracks had flash along one edge of each run. The flash was mild but cleaning it up would have present me with another bunch of hours I wasn’t willing to put into the build. After some primer and paint, it is not very noticeable.

It seems to me the standard Dragon armor kit complaint centers around the instructions let down the rest of the build. I seem to recall one or two small part number errors but nothing of any magnitude that interrupted my building process. My biggest complaints are with the detail & sub-assembly call outs. It’s a great idea, but many times, the plans just don’t show you where parts should attach or how they should be orientated. I was caught by this one or two times during my build. I found if you dry fit the parts by jumping ahead in the instructions to see where they fit, you can work out the correct orientation. Unfortunately skipping ahead didn’t always help.

I opted to build this kit in the manner of what a co-club member describes as a “slammer” kit. I started the kit on a Saturday afternoon at our LHS bring and build session and by Monday night it was pretty much done except the paint. All told, I have about 22 hours in actual build time with this kit. Admittedly, I accelerated my normal build speed and in my real world I would have expected closer to 30 – 35 hours of building time.

As I previously mentioned, the kit is pretty good. There are a few “gotchas” that I will try and point out here in the build section. The first potential gotcha, is the fact Dragon indicates to attach the main drive wheel to the transmission covers right off the bat. In theory it is a good idea, but in practice… not so much. I opted not to attach the wheel and that saved me some serious heartache later. Had I done so, the drive wheel track would have been well INSIDE of the rest of the road wheels and idler wheel.

Take your time and attach the suspension arms very carefully. This is half the battle in getting your road wheels lined up properly. Again, I deviated from the instructions by adding my road wheels at the end of the build. (Either way should work fine, my preference is to add them at the end of a build.)

Another oddity was with the rear deck. The two examples of tow cables are molded in shape and ready to lay on the deck. If you opt not to attach the tow cable, Dragon provides the small brackets where the tow cable would lay. All the parts are keyed to fit in holes that don’t exist. Normally I would have expected holes visible on the bottom of the part to drill out. In this kit, the guide holes were simply not there. If you use the tow cable it’s no big deal. Just snip off the alignment pins and glue to hull. If not, good luck on placing the attachment brackets.

The MG was another enigma. Again, not enough detail in the plans to put the interior parts together properly. Not for me anyways. Since my tank would be closed, it was no big deal. I left some of the MG parts in my parts box.

Another conundrum was the photoetch part that attached to the mud guards at the front of the vehicle. They are supposed to seal up the gap between the guard and the front hull deck. I finally gave up trying to figure out how they fit. Needless to say, I have the gap that shouldn’t exist. ;-)

Oh, I did have one little fit issue. There is a thick ring around the hull mounted MG than interferes with the hinge for the right side hatch. I removed a piece of that ring to allow the piece fit. All three deck pieces locked into place with the hull so I can explain why the interference issue existed other than something is misplaced slightly. Again I didn’t see this as a show stopper.

After painting the entire kit with some MM Panzer Grey, I applied the Cartograf kit decals with no problems what so ever.

Despite the small issues with the kit,, I think this is a fine example of a Pz. III. I look forward to picking up an another Dragon Pz. III example and building this kit again. I want to thank Dragon Models USA for producing this fine Pz. III kit and IPMS USA for giving me the chance to review it.