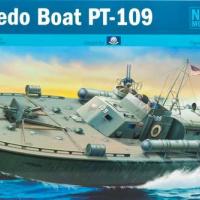 If you were male, young, and interested in ships in the early 1960’s, you know all about President John F. Kennedy and his crew with the PT-109. The movie PT-109 was released in June, 1963, right before President Kennedy was assassinated. Read about it on the net… those of us of a certain age already know the story! It’s also a great book to read…and Revell released a 1/72nd scale model of the boat at that time. It’s still available from the Revell catalog; an unending legacy.

Now, step up into big scale. Huge is a great moniker. Italeri’s PT-109 is the logical follow-on use of their previously released Elco PT-596. In 1/35nd scale, this is an absolutely massive model. Many in the R/C community have modified the basic kit with good results; as an electric-powered model, it’s impressive to watch. But that’s not why we’re here, is it?

The “crate” the kit comes in measures 29 x 14 x 9. That’s inches all around. When someone says “clear the bench”, they mean it. There are over several hundred parts in this kit. You want to get excited about parts count, buy a jigsaw puzzle…but there is about three weeks’ worth of dedicated building in the box. Or a year, if you have AMS.

Scale details on this model abound. Besides a one-piece hull and deck, there are hundreds of detail parts to make up the lower running gear, exhaust muffler system, and the upper deck components. The proper changes to armament have been made; gone is the aft 40mm Bofors cannon and forward 20mm cannon mount. Also, in this kit is a different torpedo arrangement in the form of tubes verses plain torpedoes…per prototype. You have the twin .50 cal turrets, and the 20mm cannon on the stern.

Included with all that plastic is a now-familiar Italeri history/research book with text and pictures. This proved helpful later in the build, and is an excellent addition to the basic kit.

First order of business is to drill the holes in the deck from the undersides –FOLLOWING the instructions. This will insure your boat has the correct mounting locations for all deck-mounted items. There is also an errata sheet for the instructions with several small (but important) clarifications…excellent quality control and response to customer input. Next: buy a bunch of paint. I used Testors Model Master spray FS 34102 for the majority of the kit (2 ½ cans worth). This was a logical choice, as the only real way to paint this model is to do it in stages, and they are all large areas. I decided early on to deviate from the kit instructions to make my life easier; all clear parts were left off until the kit was mostly complete. That way, I could spray without difficulties of masking. For example, the deck skylights have photo etch grilles that fit perfectly into their recesses; since superglue is the order of the day for them, this provided secure installation while affording the ability to spray the entire deck and deckhouse/superstructure assembly before installing the clear windows from the underside of the deck. Maybe not what was intended by the engineers at Italieri, but it worked very well.

Included in the box is a robust photo etch (PE) detail sheet. I found it to be a very tough brass; thick, and it eats #11 blades (lesson: use sturdier blades in the future). Using a micro shear worked, but was difficult to negotiate the turns without cutting the poo out of myself. Consideration was given to annealing the sheet to make the parts easier to remove, but then that would compromise the temper of the PE windshield framing, and I didn’t feel like performing an oil quench to harden them after annealing the other parts, so I just dealt with it. I did learn that you can cut one attachment, and the parts are usually stiff enough to flex back and forth to let work hardening break the part off at the other attachment point. Lightly file off the nub, use automotive primer, then green spray…and touch-up spot paint after the fact.

Fit was up to modern standard; the only problem I encountered was when I was lifting or moving the deck after I had glued on the superstructure, and the flexing caused the glue joint to fail. I had used plastic weld glue, (Tenax ®) but ended up reinforcing the joints from inside with thick superglue and accelerator. This fixed the problem until I could get the deck secured to the hull.

The hull is a supreme bit of injection molding, with no flash or mold gates. It’s thick enough to provide all the structural strength you need for the kit, and as previously stated, as a one-piece item the seaworthiness of the structure is proven. The deck is attached with screws, and then I used more weld-on cement to secure the deck immovably. Chine rails are installed separately, and then you have the fun of guess-gluing where the bilge vents go. I did not use the miniscule photo etch circular vents, as I was having trouble getting them off the PE sheet in one, unbent piece. I left off the stern exhaust system to facilitate painting the underside (and, fortunately, there is no anti-fouling black stripe on this boat!).

I used Duplicolor primer red spray below the waterline to duplicate the Red Copperoid coating on the real item. The instructions state you can paint the undersides gray or red, and the primer red was, according to the internet gurus, close enough to the proper color for the ‘109. Give it a day to harden, then begins the fun of free-hand masking. The natural curve of the lower hull, combined with the sweep of the bow, makes this a challenge. I measured the 21cm from the lower hull keel on the transom, and used the Mk 1 Eyeball to mask straight across. I then used that reference point, along with an imaginary line to the front of the bow, to mask a long stretch of green automotive tape. This prevented tape creep on the green upper side tape line; I used standard blue tape to fill in the majority of the lower side masking. (Green tape is not cheap.)

The forward deck house is made up of several components; fit was spot-on, and liquid cement did the job nicely. Throttles, instrument cluster, PE steps, railing, gun tubs, searchlight, etc., were all installed before a final paint shot. (I had pre-painted a lot of the parts to eliminate spray accessibility problems). On this kit, don’t forget to paint the inside of the forward cabin and mid-cabin dark green or black, as you will be able to see in and there is no detail. I can’t imagine camo painting this model!

I opted NOT to drill out the five cabin and engine room vent horns (scoops); they have depth and probably should be hollow in the throat to add to the effect, but the kit standard assembly worked (and looked) okay. Depth charge racks were pre-painted before assembly, then hit with spray after installation to hide the glue assembly marks.

The torpedo tubes have excellent details; they can be assembled with protective nose covers on, or in a ready-to-operate position with three retaining cable lanyards across the torpedo nose. The aft section has the compressed air torpedo ejection bottles, and the retaining wingnut bolts as separate items. You are given the choice of transportation position (straight ahead toward the bow) or launch position (Noses facing out). Either way they are very visually interesting.

The gun tubs have complete twin-.50 caliber mounts, and the weapons themselves look good and appear accurate. There are even injection-molded ammunition belts with miniscule rounds in the retainer clips/belts. Careful painting results in effective results, and you can (carefully) bend them to make them fit the feed rails if you so desire. The aft tub, unlike the front tub, has the anti-splash canvas cover molded on the railing; the research booklet shows that the ‘109 had this installed in one of the pictures. For those who don’t like this option, break out the brass rod and solder!

The aft 20mm cannon mount is well detailed, and the weapon itself looks accurate. There are extra magazine drums, storage drums, and the smoke generator bottle on the transom.

One of the last items added was the 30mm anti-tank cannon which was field-mounted to the forward deck before the last sortie of the ‘109. Cotton cord is provided in two colors for securing the cannon and the depth charges, along with some of the aerial and radio fit.

I intend to finish the model in a running water setting; I acquired a VERY hard to find crew set, and will also use them after suitable modification. The kit comes with a sturdy, four-part stand, which I assembled and painted gray before applying the identification decals. I also went ahead and added the running gear; when the shaft bearings and props are in place (with all three rudders), there is an added dimension to the kit with them “hanging out”.

Overall, this was a fun, challenging build. Full 10 of 10 marks to Italieri for subject, presentation, and engineering. Now to figure out where I’m gonna put it…

EXTREME thanks to Akiko at MRC for once again providing IPMS USA and this fortunate reviewer the opportunity to build and comment on a new kit…I had a GREAT time building the PT-109!

And thanks to IPMS/USA for allowing me the opportunity to review it.