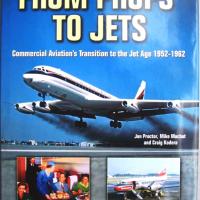 Aptly titled, this decade in the history of commercial aviation was initially dominated by “luxury airliners” like the Douglas DC-7C, Boeing Stratocruiser, and Lockheed Constellation. That was until the arrival of jets - the Boeing 707 and Douglas DC-8. The authors, Proctor, Machat, and Kodera who have long been associated with the U.S. airline industry take us back to this transitional period through their personal experiences, photographs and paintings.

After WW II, the airliner market was flooded the inexpensive,surplus aircraft like the C-47 and C-54. These became the workhorses of the airline industry as the DC-3 and DC-4. When post-war prosperity set in, demand for travel increased which in turn lead to new airliners. This is where the book begins the narrative about airline operations during this decade. One of the things that struck me while reading this book was the rivalry that existed not only between Boeing, Douglas, and Lockheed, but also by extension, between United, American and Pan Am. Each was trying to outdo the other in speed and passenger service to secure more business. There are numerous pictures throughout the book,many from the authors’ personal collections, which give a real feel for the era. Flying in those days was more “gentile” than it is today and pictures of passengers in the aircraft certainly reflect that. A full color advertisement showing the Republic Rainbow in American Airlines colors caught my attention. Later, I read with a chuckle about United’s “men only” flights between New York City and Chicago during the 1960s. Not something they could pull off today. The authors thoroughly discuss all the changes brought about by the introduction of these jet airliners. Changes involved not only equipment, but also airports, terminals, and passenger processing. As more of these new aircraft became available, the propeller airliners quickly faded into the background.

I thoroughly enjoyed this book. It was very interesting to learn about the beginnings of the jet travel we take for granted today. There are beautiful color and black/white photos of the aircraft throughout the book including an entire chapter on the Boeing 707. Any airline modeler will get inspiration from this work and anyone interested in commercial aviation will enjoy reading about the beginning of jet travel. I wholeheartedly recommend this book.

My thanks go to Specialty Press and John Noack of IPMS for the opportunity to review this book.

Inside Example
Previous Next