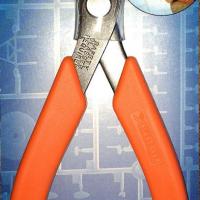 Xuron Corporation makes a number of hand tools useful for modelers. One, the Professional Sprue Cutter, is the subject of this review.

Often, sprue cutters (diagonal cutting pliers) are hard on plastic parts, especially small ones, when removing them from their sprues. The compression forces they impart can damage small parts, especially when cutting the first of two or more sprue connections.

These Professional Sprue Cutters are designed to shear, rather than compress (or pinch) the plastic, reducing the compression force. Xuron calls this a Micro-Shear®. To quote Xuron, “Shear cutting reduces cutting effort (as compared to traditional compression cutting) and extends blade life because the sharp edges are not meeting edge-to-edge. Shear cutting also produces clean, flat cuts.”

I found this to be somewhat the case. If a part, or sprue, is cut with the tip part of the blades, then there is mostly flat cutting with only a small amount of compressive cutting evidenced. The further back away from the tip one cuts, the more compressive cutting occurs, leaving two small beveled areas and a central flat area of the cut.

Now, I suspect this is because the cutters I received are not made properly. The jaw edges are not in alignment and only meet half way down their length when they are brought together by squeezing the handles (which are very comfortable, by the way). So, the shear cutting force is only operative through half of the blade length. Holding the tool up to the light shows this misalignment.

I have been told, however, that none of the dozens of these tools received and passed on through the Wounded Warriors project show this issue, so I must have received a defective one. Xuron states a good warranty policy on the package.

These are a good idea for plastic modelers. They are spring loaded to stay open and the handles are comfortable and easily spotted on the workbench. I suggest you try your pair out for proper jaw alignment before taking it home.

Thanks to Xuron and IPMS-USA for the opportunity to review this tool.