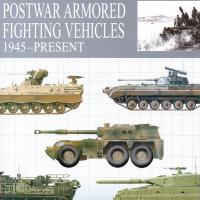 Postwar Armored Fighting Vehicles 1945-Present is a vehicle identification guide covering the post WWII era to present day. The book consists of 192 pages, which include 40 photographs and 200 color profile drawings. Each drawing has a paragraph with a general description of the vehicle and where, when, and by whom it was used. There is also a specifications box listing: Crew, Weight, Length, Width, Height, Engine, Speed, Range, Armament, and Radio.

The book is arranged chronologically and chapters include:

This book is full of useful information for modelers. It is a good basic reference for those who model modern subjects and I recommend it highly.

I would like to thank Casemate Publishing and IPMS for the review copy of this excellent.