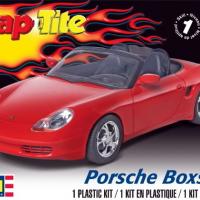 In 1992, Porsche produced a concept car that harkened back to an icon of its early days: the Boxster. A two-seat, mid-engine roadster that was low on frills and high on performance. Four years later, the concept became reality, and the Boxster became the best-selling Porsche until the Cayenne SUV came out in 2003.

Revell has recently brought us a Snap-Tite version of the first-generation Boxster. Let’s give it the once over.

As you would expect for a Snap-Tite kit, part count is low and assembly is simplified. The 32 plastic parts are molded in red, black, clear, red clear, and chrome. Two metal axles, two screws, four vinyl tires, a sheet of stickers, and the instruction sheet round out the box contents. As one would expect for a new mold, the parts are free of flash and the details are crisp.

The body is molded in red. Seam lines run down the peaks of the fenders, but they are so light as to be almost invisible. In truth, I didn’t notice them until I ran my fingers over the body to try to find them. The side mirrors and chassis are also molded in red, as are the brake disks. The mirrors are, unfortunately, hollow: you’ll need to find some way to fill the holes where the mirror faces should be if you want to make this kit look right. The chassis has lots of nice detail engraving that, with a bit of paint and time, could be made to look very good.

The interior is molded in black, and while it is quite simple, there is also a lot of nicely-engraved detail. Any experienced modeler could make this look presentable.

The windshield and windshield frame are molded as a single clear piece, as are the roll bar and wind deflector. Chrome pieces are limited to the headlight reflectors and the wheels.

Assembly is, pardon the pun, a snap. The folks at Revell really did their homework on this one, and it shows. The wheels go on the axles much more easily than is usual for a snap kit, and yet they are still snug. The side mirrors, often a problem area in kits like this, fit beautifully. The only problem areas are the disc brakes, which are a tight fit on the backs of the wheels; and the headlights and reflectors, which take a bit of coordination to keep in place until they are snapped in properly.

The stickers consist of a Porsche emblem for the hood, a license plate with the Porsche emblem, Porsche windshield and lower body stripes, and some racing-style numbering. These appear to be up to Revell’s current standards, meaning thin and well designed.

Overall, this kit has a lot going for it. It’s a great subject, it has good detailing, and it is easy enough for a youngster to put together with little or no parental assistance. The two main drawbacks for me are the red brake disks and the clear windshield frame. I’m also not overly fond of the shade of red they molded the body in: too much on the tomato-red side for my tastes.

Normally, I would have dressed this kit up a bit with paint detailing and BMF where needed; unfortunately, I moved a couple of months ago and still haven’t been able to locate all my modeling supplies or set up my workshop in the basement yet. When I do, I’ll be disassembling this model and doing it up right. Candy apple red body, brown leather interior, and detailed chassis. I’ll also be painting the windshield frame and roll bars, of course, and doing all those other little things that make a kit come alive. Revell has given us a great canvas to work with in this kit.