From A Porsche 962C Limited Edition 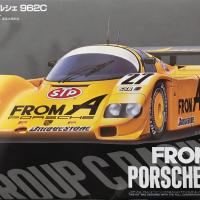 After the Porsche 956 was banned from competition in the IMSA GTP in 1981 on safety grounds because the driver’s feet were ahead of the front axle centerline, Porsche made modifications to the vehicle to make it eligible for competition. The 962 debuted at the 1984 24 Hours of Daytona with Mario and Michael Andretti driving. It lead the race until lap 127 when it encountered engine and gearbox problems. These problems were worked through and it had a lot of success from 1984-1993. A total of 91 962s would be produced between 1984 and 1991, with its final victory occurring at the 1993 IMSA GTP Championship.

The kit consists of a total of around 70 parts on two main black sprues; a clear sprue; several sprues with wheel parts; a rubber sprue with 4 tires; two sheets of decals, one large one with the decals for the car, and the other smaller one with two decals per tire; and an 8 page instruction sheet.

The instructions are clean and easy to follow. One thing that made it easier for me to follow was to print out tiny slips of paper that give the color breakdowns for the various numbers they are associated with. I taped two copies of this list in unobtrusive places on the instruction sheet. This kept me from having to keep referring to the color key.

They establish a naming convention for body decals as being a number in a circle. For the tire decals, they keep the outer circle convention, but use the letters A and a B for those decals. If you aren’t paying strict attention, this could be a bit confusing, but for distinguishing between the two decal sheets, it was probably the best choice Hasegawa had.

The kit is very easy to assemble. Although I didn’t do a great job on it, it still looks fairly nice and has made its way into my model display case.

The body is cast as a single piece. It is a beautifully cast piece that requires only minimal sanding on the side panels to make it ready for painting. Except for two unfortunate things, described below.

The problem here is that Hasegawa has provided us with the body of a 962, and has the modeler cut the fins off of both sides of the rear quarter panels. No matter how carefully and how well you remove these fins, there is the distinct possibility that you are going to also remove surface detail from the top of the fenders, and some from the outside tips of the rear of the car where the taillights go. I personally think this is quite unfortunate, and it seems like a manufacturing shortcut that has a negative impact on the final result.

The kit has a very rudimentary interior, featuring a dash that has a few details that the modeler is directed to paint, and a decal of the speedometer. The interior also has a steering column, a shaft with a control knob on it, and the driver’s seat. To be fair, once assembled it is extremely difficult to see inside, so any lack of detail is very forgivable.

On the tub next to the driver’s seat, there is a box that you are directed to paint steel color, on which a square Bosch decal is placed. The Bosch decal has the Bosch name upside-down, which I have to guess is intentional, but doesn’t make much sense. Someone looking into the car would see the name upside-down, but I guess if someone was looking in the back window or something, the name would be the right direction?!? Not sure about that at all, but have to assume that they patterned it after the original.

The windows of the car are all very nicely formed. The clear pieces have a lip representing the frame of the window, and it is fairly trivial to do a nice job of painting the black frames for the windows.

I can’t give the same sort of kudos to the headlight lenses. The clear plastic for the headlight lenses, although possibly closer to scale thickness (?), are EXTREMELY fragile, and do not clean up easily. One of mine cracked in spite of how delicately I was treating the part, and there was no way to fix the missing piece, so I just left it. I assume that if I had the time and patience, I could have contacted Hasegawa and received a replacement part.

It is difficult to remove the seam in the middle of the tire. I sanded quite a bit, and tried nipping them off with a hobby knife, but couldn’t get them completely cleaned up.

I was very concerned about how well the decals would look on the tires. I had hoped for plastic tires embossed with the Bridgestone logo that could be dry-brushed white, and was sure that the decals would be silvered and ugly on the sidewalls.

The Bridgestone/Potenza decals were printed reversed, so when you float them off of the decal sheet, you have to apply their face to the tire to made the decal look correct. I used Micro Sol and Micro Set, and it is hard to tell that the words on the tires were decals. I am totally impressed. The only thing was that two of my Potenza decals fell apart during application, so I left those off and just put the Bridgestone ones on.

Which brings me to my last observation...

I had big troubles with almost all of the decals in this kit. I have never had this kind of trouble with Hasegawa decals before, so I am not sure where the disconnect occurred, but I had to carefully place several of the decals to butt up against their torn pieces so that they looked pretty much intact.

If you look closely, you will see that the FROM A decal on the right side of the model has been damaged. This was my bad – after I had applied Micro Sol to the FROM A decals, I accidentally brushed a finger over the right side of the car, causing part of the decal to disintegrate. Fortunately, this happened in a spot that I should be able to just cover up with paint someday.

The number 27 decal on the side of the body is actually two decals – a white square decal, with a black “27” decal placed on top of the white square. I’m not sure why it was done this way, rather than one white decal with a black “27” printed on top. Applying the 27 decals EXACTLY centered EXACTLY the way that it appears on the instructions is a bit tricky, and took me quite a while to get mine “close enough for me”.

After the decals had all set up and dried, on one side of the kit my 27 decal seems to have torn somehow, and the decal seems to be lifting off of the model, so there is a gap in the top of the decal where the white decal below is showing through. Perhaps if the 27 decal was printed as one decal with a white background, the top decal would not have split like this. I think for the future they might think about printing the number decals as a single decal.

But I will say that the decals REALLY jazz the look of the final model up a LOT! You just have to be extremely gentle with them, or possibly see if there are any decal sets from another supplier that will do.

Aside from having to remove the 962 wings from the rear of the body, and having several decals disintegrate on me, I really like the way the model looks. It is an easy kit to assemble, has nice surface detail on its body, and ended up a cute build. It reminds me of the days of my youth, driving AFX Le Mans-type slot cars with my best friend. Very worthwhile.

Contents – note that the body is one piece, cast in yellow, and two decal sheets

The tire decals are printed in reverse, so you place the non-adhesive top part on the rubber tire. I don’t built many car models, so this might just be the way that everyone does them, but it was a surprise to me.

In the process of removing tail fins, I have damaged the rear of the car

The driver’s seat module – the grillwork on the sides requires dry-brushing with silver paint to make it stand out, as it is visible from the exterior.

Inside the cab of the car looking toward the dash and steering wheel – the car does not afford much of a view of the interior, so I didn’t spend much effort on sprucing it up

The fuel caps on both sides are separate pieces that glue in from the inside of the body, which is much better than if they were just cast into the body. This allows you to paint them separately and avoid masking issues.

Nondescript underside of the car, but you can see where I had difficulties removing the seams in the center of the rubber tires

The decals sure sport up the look of the kit. Try as I might, I couldn’t get the headlight lenses to look presentable.

View from front above – in spite of my lackluster modeling skills, Hasegawa has delivered with a kit that is pretty spiffy-looking when completed

Rear of completed kit. Damage to the right side due to my clumsiness with hobby knives....

Final kit reminding me of days past, racing slot cars with my buddy, John
Previous Next