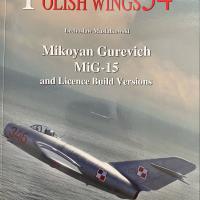 it’s a good time for fans of reference books. Since the collapse of the Iron Curtain, many former Soviet Pact countries are flooding the market with detailed new sources aimed right at the modeling community. This volume focuses on the Mig 15 in service with the Polish Air Force. Each of the seven variants, which are defined by foreign or domestic manufacture, are covered. The first two sections cover the Soviet manufactured Migs, the Mig 15 and Mig 15bis (improved). In between the end of the Soviet built examples and the Polish built series were the S102s manufactured in Czechoslovakia. The Migs built in Poland were part of the Lim series which translated meant “License Fighter”. In all, four Lim series were built.

Each section follows the same format of a description of the specific type, the units that used them and where they were stationed. High quality color plates by  Andrzel M. Olejniczak conclude each section. The photographs are primarily black and white depicting the men of the Polish Air Force in daily operations. There is a lot of inspiration here for modelers. Two of the most beneficial aspects of this book are the explanation of the serial numbering system generally painted on the aircraft nose. Not only is the numbering system explained but specific serials are given for specific units within specific timeframes. The second bit of information has to do with how the aircraft were finished. Let's just say there's a lot of natural metal and silver involved. This book was written and published in Poland. The translation into English along with a lot of very specific information doesn't make for the easiest reading. The high point of this book are the photos and illustrations. If you are building or have an interest in Polish Mig 15s, you won't be disappointed.

Thanks to Casemate and IPMS for the review sample.