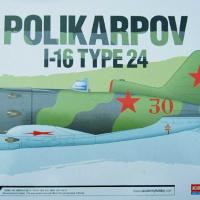 The Polikarpov I-16 was the world’s first single-winged fighter plane with retractable landing gears designed by Nikolai Polikarpov and Dmitri Grigorovich while in prison. Service trials of the I-16 began in 1934. Several variants were produced until the Type 24 was brought into service. The Type 24 contained four7.62mm × 54mmR ShKAS machine guns (two located in the wings and two in the fuselage). Landing flaps were added replacing drooping ailerons. Tailwheel added and starboard side cockpit door were also added. The Type 24 was powered by a Shvetsov M-63 radial engine with 1,100 hp at 2,300 rpm for takeoff. The Polikarpov was produced from 1934-1942 with a total 8644 built. An interesting note is that there are only six airworthy I-16 Type 24s in service today.

This reissue kit by Academy is marked as a “Special Edition-Limited Availability” released in May of 2016. The Polikarpov with a length of 20 feet 1 inch and a wingspan of 29 feet 6 inches undoubtedly was a small airplane akin in size to the Gee Bee Model R of the 1930’s. This plane when completed has a wingtip length of 7-1/2” with a fuselage length of 4-3/4”.

The version I built is the I-16 Type 24 of Lt. Krichevskiy, 254th lAP, Budogoshch, Leningrad Front 1942 with its fuselage number 27 and his kill scores behind the cockpit. This paint scheme appears to be very colorful and I am definitely looking forward to the build.

Upon first inspection, one notices the size of the box. It does appear to be a little small for 1/48th scale. The contents are packaged in a shrink-wrapped box with great looking graphics of Lt. Krichevskly’s airplane number 27 in green and light blue colors. The box measures 11-3/4” long x 7-3/4” wide x 2-1/2” tall. Included in the box are three light gray styrene sprues enclosed in cello wrap, one clear sprue for a total of fifty-two parts, one fan fold eight-page instruction manual and one painting/marking guide for the four versions possible. I would have expected this painting/marking guide to be in color but it is printed in black/white. A quick check at Academy’s product website does show the colors for the four versions which can be very helpful in deciding which version to build. The decals are printed by Cartograf so I don’t expect any problems or placement issues. Decals will be addressed later during that step of the construction.

Upon opening any model kit, what I like to look for is the amount of work, such as flashing, location holes, ejector pin release points (sink or raised marks) and mold seams that need to be addressed during construction. The sprues are molded in light gray styrene. Upon inspection of the wings and tail, I noticed that Academy molded them with both raised and depressed panel lines. Evidently, the same molds from Hobbicraft were used. However, with the size and scale of this aircraft, they won’t be noticed. There were a few seam lines and release points that will have to be removed and puttied, also several parts do have flash that will have to be addressed.

Decals are printed by Cartograf and appear to be thin. The kit includes markings for the following aircraft:

The decals laid down quite nicely except for one small area where the MicroSol did affect the paint. This was a problem I am attributing to using a different brand of clear gloss than I usually do. Other than this small problem there were no other problems.

Even though Academy does provide in the instruction manual a table listing the various paints with their manufacturer numbers, these numbers should be checked against references and colors. As an example for Russian Green, the Model Color by Vallejo is given as 70.821, which is German Camouflage Beige. Which would not be the correct color similar to actual reference pictures. Again double-check your reference color pictures. Next came a light coat of Vallejo Gloss Black Primer 77.660. The top surfaces were painted with Vallejo Model Color 70.892 Yellow Ochre, which closely resembles reference pictures and the Testors Model Master Light Blue # 4778 underneath the wings and fuselage. As a last step, a coat of Testors semi-gloss was sprayed on for protection.

In conclusion, this was an enjoyable build and the small size lends to a collection of aircraft. For those modelers who want to add aftermarket accessories there are several manufacturers to choose from i.e. Eduard makes a I-16 color photo-etch detail set along with a resin exterior set, REXx makes metal exhaust for the I-16 Type 17/24/29 and Squadron provides canopies.

Thanks to IPMS/USA, Academy and MRC for allowing me to review this kit.