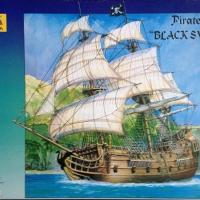 Well, the Black Swan has set sail! In the process, I’ve developed a new appreciation for all those shipwrights out there, especially those who build from scratch! But I digress; in this final installment ,we’ll cover steps 37 to 61.

First up, the masts, of which there are three: the main or largest mast, the fore mast, and the mizzen or rear-most mast. The mast assemblies are molded in halves with hollow centers. One of the tricks I learned is that plastic ship masts require some added strength in the form of a metal tube or rod inside the hollow space. I chose brass rod to reinforce mine. The only modification you have to do to make this work is to remove the pins at the point where the mast sections overlap (called doubling). The pin is removed and a hole is opened up to fit the brass rod’s diameter. After joining the parts and smoothing the joint with some sanding, I mixed up a paint color that looked right to me and airbrushed the masts and the bowsprit. The rope bands molded on the mast (called woolding) are tar-painted rope, so I painted them black. The trestle trees and platforms were next. Follow the instructions very carefully with regard to the blocks that are tied to the masts at this point. Pay special attention to the type of blocks because they are not all the same, and trust me, it would be very difficult to change some of them with the rest of the rigging and sails in place.

Speaking of rigging, it now begins in earnest. For the novices out there, rigging falls into two types: standing rigging and running rigging. Standing rigging is permanent rigging used to secure the masts against the stress and strain of wind and structural loads placed on the ship. In most cases, the standing rigging is coated with tar to preserve it, hence its black color. Standing rigging includes the ratlines and stays. In this kit, the ratlines or shrouds are molded parts with separate deadeyes. These are secured to the hull on projecting boards called chain wales, or chain plates. The only issue I had with them was the tabs on the deadeyes didn’t quite make it, so I had to extend some of them with plastic strip stock. Be careful not to cut the tabs off when removing the deadeyes from the trees because they look a lot like they should be removed. The next rigging is the stays that secure the masts to the hull and each other. The knot tying starts here, and while the instructions have very nice drawings on how to do it, they don’t translate to the thread quite as easily. I struggled at first and learned some important lessons early on. The best method I found is to tie good knots that hold and don’t secure them with glue until they’ve been attached to where they are going. I started by tying and securing knots with super glue, but it stiffens the line so much it couldn’t straighten out when tensioned. It just doesn’t look right when rigging bends at the connection points. The thread provided for the standing rigging is black nylon and can be hard to knot because of its stiffness. Once I got used to it, it wasn’t bad. The most common knot I used is called a buntline hitch.

Next up are the sails. These are all molded fully furled. First, I masked off some strips and gave them a dark color to represent the reef bands, essentially extra strips of canvas to reinforce the sail. Then I used a combination of pre-shading and post-shading to age them a little while accenting the relief in the parts. Yellowed canvas was the effect I was after and I’m pretty happy with the result. I must be turning into a ship modeler because I thought it would have been nicer if the sails were separate from the yard arms because the rope banding (called lacing) around the yards would have looked better if actual thread were used in lieu of painting molded raised rope.

The most difficult part of the rigging takes place at this point. The running rigging is used to manipulate the sails while the ship is underway, and these are secured to belaying pins mounted on rails. The instructions have you land these lines on the belaying rails before installing them on the ship’s hull. I devised a system of labeling each line so I could make sense of it later. If you don’t do something like that, you’ll have a conflagration of threads to sort out. The other difficulty I had at this point was at each belaying pin, the rope is coiled and laid over. Try as I might, I didn’t come up with the system to make that happen.

The sails are installed from the top down on each mast. Don’t rush this process. There’s a lot of work in close quarters, at times resembling building a spider web. I could only work on this for so long untill the lines all blended together and I would have to take a break. The other trick I learned when rigging sails was to pull the lines through the blocks on both sides, then tension them together before tying them off. This balances out the rigging so your sails aren’t askew. Another important point is not to tension the lines to much. Even with the brass rod in the masts, it’s possible to bend things out of shape. You want to pull enough to be taunt but not tight. Don’t fear running out of thread. I cut every line longer than recommended and still had plenty of material left over.

Last but not least, I installed the gingerbread on the stern and finished the lanterns. The framing on the lanterns was made by painting bare metal foil brass color (I know it comes in brass but I didn’t have any), which I cut into strips and put on the lanterns. I decided not to do much to the stand other then paint it black and rub a little gold powder on it to bring out the name sign. Finally, I hoisted the Jolly Roger that lets everyone know this ship means business. I thought it a bit cheesy to cut out a paper rendition from the instruction sheet but it actually looked ok on the model. I did run a black sharpie around the inside edge to make sure it wouldn’t show white when folded over.The only part of the instruction you shouldn’t follow is putting the capstan poles in place when the ship is underway. I didn’t catch that detail before I’d rigged everything.

So there you have it! My first sailing ship is complete. It’s not perfect, but everyone who’s seen it is impressed. This is modeling taken to another level. I’ve never spent this much time on a model before, nor gotten as much satisfaction out of the finished kit. In spite of my limited experience with plastic ship models, I was challenged but not overwhelmed. Careful adherence to the instructions is the key to producing a stunning model. The price might seem high at first glance, but considering the amount of model building time you get out of it, it’s actually a pretty good deal.

This kit is not for beginners. There’s a lot of complicated work to make this come together. Perhaps the best part of this experience is the new world of history and model building it’s opened up. As I pointed out at the beginning of this build, I really knew very little about sailing ships. As I do with all my builds, I researched the subject by buying books and discussing it on the IPMS forum. In the process, I’ve started a library of shipbuilding and history books for future use. One of the gems I came across in a used bookstore was Ships and Seaman of the American Revolution by Jack Coggins. (Published in 1969, ISBN# 0-88394-032-9.) This book not only delved into the history of that period, it contained some of the clearest illustrations I found of ship construction and rigging and how it all worked. After reading that book, I realized how the cat’s eye should be attached to hold the anchor. The best part is that book is still sold via Amazon or wherever you get your books.

In conclusion, this was real journey of discovery for me. If you’ve never build a sailing ship before, you should give it a try. While this might not be the best place to start due to its complexity, it’s certainly a worthy endeavor for those with a few sailing ships under their belt. Thanks so much to Zvevda / Dragon Models USA for this magnificent model and to the IPMS review team for granting me the opportunity and the time to, hopefully, have done it some justice.