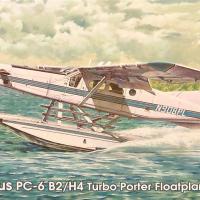 The Pilatus was a widely exported Swiss (STOL) turboprop utility aircraft floatplane variant, powered by Pratt Whitney of Canada. The aircraft began its career in 1959. It had been modified with several different engines. The aircraft ended its military career in the mid 1990’s. It then started a new career, or second life, in the private sector with some modified as floatplanes.

The model is made of injection molded plastic, gray in color. The instructions were made up in book form, printed on both sides of the pages. Other parts were made up of clear plastic windows and landing lights.

I started by installing the inside cabin components – pilot/co-pilot and passenger seating – painting as the components were installed. Some of the seat structures were made from thin brass wire, as the plastic supports were too fragile and broke easily. The instrument panel was also installed at this time. Next came the assembly of the interior into one fuselage side, and then the other half was added. I observed that the vertical fin was bent, and I cut halfway through the thin structure, straightening the vertical fin and re-gluing. Next came the assembly of the floats and float supports. I left the wings and forward engine cowl off the fuselage at this time. The reason for leaving the engine cowl off is because the aircraft needs to sit on all four wheels and not become a tail-dragger, so the cowl is the best place to put the needed weight. These three items were pre-painted prior to assembly. The wings and struts were then added. With the proper addition of weights, the forward engine cowl was added. I then finished decaling. This then comleted the model.

I used Scale Soat II finish, white in color, Model Master light gray, Testor’s Glosscote and Dullcote. The decals basically went on well except for one area, the right front cowl by the engine area, due to air intakes’ curvature.

The kit went together well. The kit build-up is for the more experienced builder, as there are many fragile parts and sensitive decal material. I would like to thank MMD Squadron for providing the kit for review, and IPMS-USA for allowing me to review it.

Complete - side
Previous Next