Pigs, Missiles and the CIA 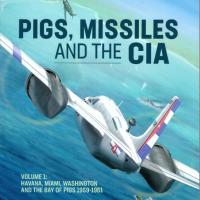 A native Texan, Linda was born in Del Rio. Linda retired from the U. S. Government in 1997, after being employed in various occupations during her 33 years Civil Service career, in which she worked in various locations, including the Laughlin AFB, Charleston Naval Base, USAF HQ Europe, Wiesbaden, Germany, NASA, and the Internal Revenue Service in Houston. She has previously written Flight of the Dragon, detailing the story of Chang-di ‘Robin’ Yeh, a Taiwanese U-2 pilot, and Remembering the Dragon Lady, first-person memoirs of many of the pilots, specialists and family members who supported the early US spy-plane projects.

Helion’s latest book in the Latin America @ War series is a square back soft cover includes 74 gloss paper pages. The front cover features a color painting by Pablo Albornoz depicting a Douglas B-26B preparing to attack a Cuban Hawker Sea Fury. The Brigade 2506 Invader was able to damage the engine of the Sea Fury, piloted by Carreras Rolas, as it pulled up from a diving attack on the SS Rio Escondido, but the Sea Fury was still able to return to base. Piloted by Captain Mario Zuniga, the B-26B was carrying the fake serial number FAR 935 in a poor attempt to confuse the press that the gun nose B-26Bs were actually the glass nose B-26Cs flown by Cuba. The rear cover features a Cuban Revolutionary Air Force (FAR) Hawker Sea Fury profile by Tom Cooper. The lower color profile by David Bocquelet is one of five M41 Walker Bulldog light tanks provided by the CIA to Brigade 2506. Unfortunately, all five Bulldog tanks ran out of ammunition on the second day of the invasion. I counted 83 black and white photographs, there are no color photos. There are also 12 aviation color side profiles by Tom Cooper and Goran Sudar, plus 10 color illustrations of armored fighting vehicles by David Bocquelet. There are 3 black and white maps, 1 full color maps by Tom Cooper.

Linda Rios Bromley kicks off with Cuban political history leading up to the arrival of Fidel Castro’s parents. Apparently, Cuba was a storm of racism due to ‘white supremacy’ and ‘inequity’. Fidel’s father, Angel Castro y Ariz, arrived in Cuba as a conscript for the Spanish American War of 1898. Despite being married, Angel decided to have seven children with a household servant 27-years his junior. Fidel Castro’s rise to power is followed, aided by his brother Raul, and Che Guevara. Fidel Castro’s overthrow of dictator Fulgencio Batista’s [Page 07] government activated US government agencies, particularly the CIA, in various plots to eliminate Cuba’s new communist leader.

Running amok under the Eisenhower and Kennedy administrations, the CIA managed to recruit exiled Cuban patriots, self-named Brigade 2506, to take back Cuba from Castro.

It’s not fair to call what happened next a ‘comedy-of-errors’ since war is not funny, but the author introduces plenty of ‘Red-Flags’ as the CIA, and other members of the US government fumbled along. The events are presented in bite sized chunks of location, date, and hour, starting on February 2, 1961, in Washington, D.C. This failure in planning and execution didn’t have to happen. Many in the US government recognized the plan was doomed from the start, especially without air superiority. The plan may have even succeeded in spite of so many bad decisions if air support wasn’t pulled after the initial B-26 strikes. Unfortunately, that was exactly what happened. Once the invasion had landed on the beach heads, aerial support was stopped. The sections include:

I have to admit that I was appalled after the opening chapter applied currently popular terms of the far-left being used to describe the history of Cuba. The rest of the book is rather eye-opening on the failures of the US government to properly plan, coordinate, and ultimately to make the correct decision to go forward. Horribly, many Cuban patriots paid with their lives for trusting in the US government. Linda Rios Bromley does address the agony of US officers and servicemen that wanted to help Brigade 2506, but had been ordered to stand down. One can easily see the parallels to what happened in Afghanistan in 2021.

The color profile illustrations from David Bocquelet, Tom Cooper, and Goran Sudar are great [Page 32v]. The period black and white photographs are all quite interesting and are well captioned. Looking at the Helion site, Volume 2 of Pigs, Missiles and the CIA will be addressing the Cuban Missile Crisis and I do look forward to it. I did enjoy how Linda Rios Bromley advanced the book once the invasion started by focusing on the location, day, and time [Page 40 and 48]. Although the storyline jumped from location to location, it worked great from my perspective and held my attention well. I’m thinking that will work well with the battle between Kennedy and Khrushchev. If you own any of the previous releases in the Helion @ War series, you know what you are getting. If this is your initial entry into this series, you will be pleased.