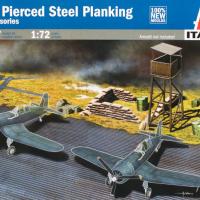 This is a most unusual kit to review. It is of PSP – Pierced Steel Planking used during WW II to build runways quickly. It was also called Marsden Mat.

These runways were used mostly in the Pacific theatre of the war. They were assembled quickly by Seabees on the islands of the Pacific as the Allied forces got closer to Japan. They were usually painted olive or black and the steel showed thru as wear took its toll.

This kit consists of a 9.25 by 13 inch base molded in light grey plastic. Most of the base of PSP has some ground cover to show the accessories. The accessories are a lookout tower, sandbags, extra PSP, 55 gal. oil drums, and several petrol cans.

I first sprayed the whole base with a dark grey/black primer. I then drybrushed OD over the PSP and then lightly drybrushed steel to show the wear. I painted the ground surfaces several shades of sand. I used Vallejo acrylic paints on the painted surfaces.

I assembled the lookout tower after painting all the parts dark brown, then dry brushing them with a lighter wood tone. I would like to point out that parts 3A and 4A should be reversed to get the proper stand on the tower. I painted the sandbags OD and drybrushed with a lighter shade of the same. Note that there are two types of petrol cans – use the US ones, as the others are German.

I placed all the accessories randomly and the set was complete. It doesn’t include any aircraft but is ideal for any 1/72 WW II Allied aircraft. I put a 1/72 P-40 on the completed base and it looks great.

I would highly recommend this for an easy project to make a terrific WWII Pacific theatre diorama.

I wish to thank Model Rectifier Corporation and IPMS-USA for giving me this terrific kit to review.

Tower base and accessories

With aircraft added
Previous Next