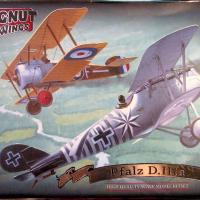 1918. A conversation overheard in a Jasta commander’s office as he questions a replacement pilot:

What did you train on?
The usual machine, Herr Hauptmann, an out-of-date Pfalz.
That’s what you’ll be flying here, too.
But…at flying school they told…
Flying school! In flying school, they’ll tell you anything. Up-to-date machines go to experienced pilots. Both are in short supply. It’s a cruel world, Stachel.
Yes, Herr Hauptmann.

That was my introduction to the Pfalz fighter back in 1966, compliments of The Blue Max (even if they were replicas and reconfigured Tiger Moths). Pfalz’s most successful fighter was its first original design, the D.III (and D.IIIa, a minor modification bringing the aircraft’s two machine guns outside the fuselage to facilitate clearing jammed weapons). One thing they got right in the movie were some pilots’ distain for the Pfalz, often looked down upon as the weak sister to the then dominant Albatrosses and Fokkers of the successful Western Front Jastas. The Pfalz was slower, heavier on the controls, and had a lower rate of climb than the Albatros D.III or D.V. On the other hand, they were sturdier, more maneuverable, and faster diving, and many latter-day enthusiasts of the Great War see the Pfalz D.III as one of the most graceful aircraft to come out of that conflict. Nearly 1000 of the D.III and D.IIIa were eventually built before Pfalz shifted production to the D.XII, with some still in front-line service by the end of the war.

Much has already been written about the overall high quality of Wingnut kits, from the tightly engineered and molded kit parts to the well laid-out and easy to follow color instruction booklet. There’s very little in this kit that would give me reason to argue with those earlier, glowing reviews. They’ve gone the extra mile by including a great number of extra parts (including two separate lower wings with accompanying wing strut variations, four different props, and additional instruments and Mercedes engine parts) to build any of five different Pfalz aircraft. The large, two-sheet decal spread has everything from variations of the straight and Maltese crosses to instruments, and enough lozenge decal for five specific aircraft. You’re even given the option of machine guns molded with and without cooling jackets, and photo etch jackets to use if you so choose.

A decision should be made prior to assembly as to which aircraft is going to be modeled. The kit has parts and marking options for five different aircraft, and the real aircraft varied from one to another. As with most aircraft builds, this one begins with the cockpit. A fair amount of time was spent here, with this area’s considerable network of interconnecting ribs and framing. While there is little in the way of instrumentation compared with aircraft of more modern periods, what there is of it is spread liberally about the cockpit. All the painting to replicate brass, copper and natural wood parts had me feeling more kinship with builders of ancient sailing ships than modern 20th century aircraft. The instructions even provide a diagram for rigging the rudder and flap cables with the stick and foot pedals. I used stretched sprue for these. The only sour note I found in this area came with the single piece photo etch shoulder harness. This was the one case where the illustrated instructions provided limited help, as the side view shown of the seat and harness gave no good evidence as to how to fit this part. I could never get the harness into position as indicated in this tight area, and ended up bending it to the point of breaking. The somewhat repaired harness was eventually fitted after the fuselage was closed up, but it’s far from perfect.

The Pfalz’s intricately detailed Mercedes engine is a small gem of a kit in and of itself, so much so that you want to give it all the attention it deserves. However, very little of will be seen on the completed model, unless you leave off the fuselage side panels beside the engine. Once attached to the interior framing just ahead of the cockpit, the section fits snugly (and I do mean snugly) between the fuselage halves. I must have left a few traces of paint residue between the cockpit frames and the fuselage sides, since I couldn’t completely eliminate the gap between the fuselage halves. A little Mr. Surfacer took care of that.

The wings are molded as solid pieces, not in separate upper and lower halves, and are subtly detailed along the ribs. The single bottom wing fits securely into the bottom of the fuselage. The minor gaps there along the joint at the fuselage bottom are easily filled and sanded smooth. The top of this wing joint along the fuselage is invisible. I took Wingnut’s advice and added attachment pins made from thin wire to what are very minimal existing attachment points for the ailerons, rudder and tail flap. At this point, the model was ready for painting.

I chose to depict an aircraft that was mostly Pfalz’s “silver grey” color. The instructions give color references for Humbrol and Tamiya paint colors, neither of which I use. With the instruction’s color plates as reference, I custom mixed a light grey from Model Master enamel RLM 63 Lichtgrau and white. The cockpit and exposed engine were masked, and all the aircraft parts were given a coat of this primary color. The other major aircraft color is black, covering the horizontal and vertical stabilizers as well as a short portion of the aft fuselage. This aircraft’s particular markings include a series of black vertical stripes around the aft half of the fuselage, back to the black tail. These stripes are part of an intricate, three part decal, and the trick was to mask the black tail the correct distance so that the stripe decal meets the painted tail at the right place. The decal allows for about a 1/32 in. margin for error. Fortunately, I measured correctly and squeezed within the margin on the first try.

I spent nearly as much time decaling as assembling. The three-part fuselage decal seemed daunting, but fit together almost flawlessly. Only a tiny bit of trimming along the bottom was required. The white of the crosses is very opaque, covering the black on the tail rudder and the bottom wing lozenge colors nicely. Applying the lozenge decals is an acquired skill. Wingnut has you lay it along the wing in strips, similar to the real thing. Trimming the overlap along the wing edge, especially around the ends of the wing, requires a very sharp blade and a good supply of patience. The decal sheet supplies plenty of rib stripping (in upper and lower lozenge colors), for application along the wing edges as well as the ribs. That helped to cover some of the ragged trimmed edges, but they come with their own set of issues when you try to curve them around the wingtips. But those lozenge colors are eye-catching when the process is all done. Wingnut recommends that you not use setting solution with their decals. I chose to use a bit of Solvaset on the lozenge decals to insure that the subtle rib detail and other protrusions showed clearly through.

Once painting and decaling of the major subassemblies is completed, the upper wing and undercarriage are mated to the fuselage/lower wing. The alignment and fit of the wing struts is easy, but quite snug. Determine beforehand if you plan to rig the aircraft. Tiny rigging holes have already been placed on the wings and fuselage to aid in the placement of lines, and the instructions provide rigging diagrams and ample photographs. I used Invisible Thread, slightly smaller in diameter than the .15mm monofilament line recommended by Wingnut (and therefore, a bit easier to use). I used turnbuckles from Bob’s Buckles (these are highly recommended, and Bob’s service from the U.K. is superb) to ease the process. A magnifier, good tweezers, a steady hand and an overabundance of patience is required for this tedious but not insurmountable process.

For anyone curious about Wingnut kits and tempted to take the plunge, the Pfalz D.IIIa is a great introductory kit. The parts are very well engineered and the fit is near perfect, particularly with the wing struts, and the instructions are the best in the business. The kit offers a beautiful, two-page decal sheet for five different aircraft with color schemes ranging from simple to complex. Additional sheets for other aircraft are also available from Wingnut. These kits are as complete a package as one could ask for and well worth the price. My gratitude is extended to Wingnut Wings for providing IPMS with this review sample. I’d also like to thank fellow IPMS Tidewater club members Chris Durden and Charles Landrum for providing me with references and pointers for this, my first Great War Wingnut kit.