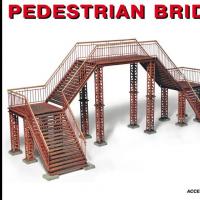 Having no knowledge of this series of MiniArt kits, I was expecting about 5 pieces of resin to clean up, prep, slap together quickly, paint and weather. Wrong! One finds upon opening the box 464 grey plastic pieces on 48 sprues. However, there are only 3 different sprues, each repeated 16 times. Instructions are line illustrations on two double-sided 8x11 sheets, and are pretty straightforward – more on this later. When the dust has settled, you will not only have a brilliant diorama accessory but also a number of extra parts left over which will be extremely useful for the diorama hound.

This kit is designed not as a stand alone kit but as a backdrop for a 1/35th scale diorama. As such, it is a brilliant design. At 25” long when complete in its intended form, it is for a large diorama, and here a matter of scale comes into play. It is not big enough to function as a bridge over anything in 1/35th. At scale, it won’t span a road or railway, and a 1/35th scale figure could step over a stream without using this bridge. However, and this is brilliant part, you can use pieces of it in a number of smaller dioramas. And – the sprues are very flexible - from a production standpoint, one mold makes many kits. The individual parts can be used in a number of ways. As the box art and instructions show, the full bridge can be assembled at least 2 different ways. The genius shows for the builder, then, in that while the full bridge has limited diorama potential, the kit could provide parts for up to four different diorama scenes – or 2 or 3! These same sprues show up in other MiniArt kits, and sets of stairs can be built double or single wide, platforms in a variety of sizes, and you can link as many together as you need to build the background for your Stairway to Heaven diorama.

That said, this concept presents some challenges for the builder, namely, attachment point clean up and seams. For example, each stair section (there are 4) has 49 parts. This build is marked by a lot of clean up of the parts – some handrails have up to 13 attachments (there are 16 of that particular part!) so there is a lot of clean-up. At least there were no ejector pin marks with which to deal, but there was extra sprue by way of avoiding them. Seams will be discussed later.

In general, one makes a lot of each subassembly, and it is important to true up each part - keep each portion of the build square. If you’re not careful in the first 13 steps, the subassemblies will be very difficult to get together.

Step 1 is the box girders, four parts in each and a total of sixteen units. I experimented and found that the method of construction has to vary depending upon the type of glue one favors. If thin liquid is your preferred adhesive, you will need a jig, as this sets quickly. I used a simple block of wood, the same thickness as the width of one of the girder pieces. Make two sets, and each box will be square when joined. I prefer the more viscous liquid glue, and it is possible to get all four sides together and reasonably square, but I found that, with the viscous glue, combining step 2 with step one, adding the end plate, kept each girder trued up without a jig. So – you can take your pick.

Steps 3, 4, and 5 are joining small squares of deck plate together to make the platform floors. And now for the seams…the sections joined in fours or eights to make the platforms between risers. Assembly is very difficult, and I was not entirely successful in suppressing the joins, even though I applied glue while pieces were laying flat on a mirror. Joins are apt to be visible and the tread pattern on the top side of the plates makes dealing with them difficult. I filled some from underneath and that seemed to make them better. I think on the real thing the platforms would be produced or cut to size, not welded or bolted together. I sure don’t remember any joins while walking on one in Europe, as that would have made pedestrian traffic pretty dicey on a set of stairs. However, they do go together and I found that clamping each join together and to the mirror until dry was the most efficient means of minimizing the seams. Don’t forget to drill out the holes for handrails first!

Steps 6, 7, and 8 are the support girders for the bottom of the platforms, and again, the small pieces result in a lot of difficult to get at seams. I would glue the beams together first and then the beams to the platforms. The only flash on the entire kit was on one of the support beams, and trimming it was very interesting. Luckily, the flaws were easily hidden. Step nine is the actual stair steps, times 62, and again, each step is a three piece construction. I could not figure out a method which would eliminate the seams in all cases – some seams can be seen in the shots of the steps.

Subassemblies start coming together in steps 9 through 16, and if all is square, they go together well. Step 17 and 18 are putting the steps together into four sets and here was the only instructional glitch. Neither the illustration nor the box art is clear on how the individual stairs attach to the risers, and it is not a positive fit. I experimented and finally hit on the steps having to be attached with the rear side against the locating pin. That is the only way to get enough step out to give a 1/35th person a chance to go up and own. Looking back, it was obvious, but when making 62 of a subassembly, it is easy to get lost in the trees.

I left the handrails off until after painting, and that is a bad idea. Attach them as the instructions indicate and you’ll have an easier time. The wooden portion is easy to hand paint. I would leave off the concrete slabs on the bottoms of the supports, though, until the metal parts are painted. They are difficult to do by hand.

I painted everything in sections: two intermediate platforms, the main platform, and 2 risers. I used acrylics exclusively, the metal portions being Terra Cotta craft paint, which replicates the red paint shown in the box art very well. The concrete slabs were Testors RLM 02 Grau, and the wooden handles on the rails were Yellow Ochre craft paint – which shows up in the photos as much yellower than in real life. The color really does replicate a blond wood very well. The only weathering I did before sending this to press was to spray the traffic areas Tamiya Smoke, and begin the highlighting of the tread with graphite from a #2 pencil. The box art shows a beautifully painted and weathered metal structure, which I will replicate with washes, pin washes and filters using oils.

Final assembly was dicey. This kit is not meant to be a free standing work. It is meant to be attached to a base. The attachment points for the vertical stairs to the platforms are not thick enough to permit drilling and insertion of a supporting rod; some reinforcement can be made but it will be visible. I was unable to get a clear shot of the whole kit assembled as it kept coming apart while on the way to the photo booth. I eventually settled for the subassemblies butted together which gives an idea of how the thing will look when I get a diorama base planned and a vehicle in the picture. Even in the box art you can see the vertical girders out of alignment and mismatches in the handrails – these issues will disappear when final assembly is done as anchoring each piece to the base would eliminate them. As I have no large scale diorama in the works, I did not fix this kit to a base – a concession to my wife and my lack of shelf space. However, I have several 1/35th scale vehicles on the workbench, and now I have several nice pieces for smaller dioramas….

This is a great accessory for diorama builders and if assembled on a base, will work up fine as a single piece. Many thanks to Dragon Models USA and MiniArt for a unique and fun build, and for a very useful diorama backdrop(s)!