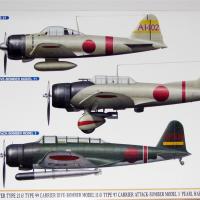 (From the Hasegawa site) On December 7th, 1941, Japanese fighters, dive bombers, and torpedo bombers devastated the US fleet at anchor in Pearl Harbor. Militarily, it was a resounding success. Most of America's battleship force was either burning or on the bottom and the Japanese strike force was barely bloodied. On December 8th, Roosevelt gave his speech and asked for a declaration of war. An entire nation woke up on the 9th and went to war by the millions. Now, 75 years since the day, Hasegawa brings you a three-kit set of aircraft from the IJN Carrier Akagi.

Upon opening a really, REALLY big box you are presented with a lot of plastic. Each kit of grey injected plastic is bagged separately. You also have 3 instruction foldouts and one very large decal sheet. The plastic is typical Hasegawa quality with little to no flash and few sink marks. The clear parts a very clean & clear and the decals are printed in register, BUT, the color in my sample was a little off…..more later.

There is nothing new here as these kits have been around for some time. All three kits start with well-appointed cockpits and the only item I added was harnesses for all 3. Once you have the cockpit tubs completed you can now assemble the fuselage and add the wings & horizontal stabilizers which all fit very nicely. Up next are the engines and there is a bit of a difference in these as: A) the Val has just 2 pieces as the twin row radial is molded as one piece; B) The Kate has 4 pieces with the twin row molded in two pieces, but the back row is molded to the firewall, however, the detail is nice; C) the Zero has 4 pieces with each row molded separately, and with a separate exhaust manifold, the detail on this engine is very nice. So far everything has fit well with no issues.

Next up are the landing gear, ordinance, external tank and other underside items. No problems were had with any of these items, but make sure you pay attention to the wheels of the Val and Kate, as they have the weighted look. Finishing up with the canopies and props, you are given a choice of open or closed with all 3 kits, but only the Kate & Val have multiple piece or single piece canopy choices. The props on the Val & Kate are single pieces but you must build the Zero prop (Hasegawa made it simple).

However, the sheet has multiple extra numbers and stripes to allow you to do aircraft from any of the six carriers. I found the colors to be not quite right to my Mk. 1 eyeball as the red was kind of pink-ish, and I felt the blue was off too much, so my plan to do a Hiryu Kate went by the wayside. I ended up finishing the 3 aircraft as follows.

Now the bad news. I used Micro-Set then Micro-Sol and finally liberal amounts of Solvaset and could not get the decals to set down right. Near boiling water softened them up and helped but still they would not cooperate. I have had problems with Hasegawa decals before, but was able to fix them…. Not so with these so watch out for this.

These are still great kits that go together well with little to no problems, and out-of-box you get a good amount of detail. The decals…well hopefully it was just my sample that was bad or something I did. If not, there are some aftermarket ones you can still find online or at shows, so don’t let this deter you from this awesome boxing. I recommend this to anyone who wants to do these aircraft.

I would like to thank Hasegawa & Hobbico for supplying this kit, the review corps for letting me build it and all of you for reading this……..Now GET BACK TO THE WORKBENCH!!

Kate, left-rear view, giving you a glimpse of the cockpit, wing detail, and lowered flaps.

The Kate from the right-front, providing a nice view of the torpedo, the rear-facing machine gun, and the paint scheme

Val from left-front, showing a bit of engine detail, a view of the cockpit, and antenna rigging.

The Val from behind on the left side, showing some cockpit detail, and surface detail in the wing and fuselage

This view of the Val from right-front shows more surface detail in the wing, fuselage, and tail plane, and the Val's fixed landing gear

Val from right-rear, showing cockpit details, and a good view of the rear machine gun

Zero from the left-front, showing its retractable landing gear, in contrast to the Val's fixed gear.

Zero from the left-rear

Right-front view of the Zero

A view of the cockpit interior from the right-rear

All three kits included in this lovely boxing of these historic aircraft.
Previous Next