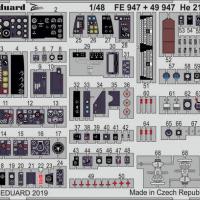 This PE set includes a small PE fret with all of the pilot's instrument panel and side panels along with the rear cockpit (radar operator's position) many panel faces. A pair of rudder pedals is also included. A three-page set of instructions is included that locate each panel face and indicate where the raised detail included on the kit parts must be removed. The PE parts do not include adhesive on the backside, and therefore the modeler must carefully glue each part in place.

I took the plastic kit parts as indicated on the instructions and removed the raised details with a micro-chisel and sanded the rough surfaces with a medium grit sanding pad. Once the surfaces were smoothed, I washed the parts in warm water and a mild detergent, scrubbing the surfaces and nooks and crannies with an old toothbrush. After rinsing the parts I allowed them to thoroughly dry.

The plastic was primed with Tamiya fine white primer and allowed to cure for 24 hours. The parts were then painted with RLM 66 and again allowed to cure for 24 hours. Several of the PE panels are sandwiched together and this is done by applying a thin coat of Future to the part with the dial faces then carefully placing the face panel over the dial faces, taking care to align the dials with the respective openings. These assemblies are allowed to dry for a few hours. An additional drop of Future was applied to various dial faces with a pointed paint brush as necessary to achieve the appearance of a glass face over the dials.

Once the individual PE parts were removed from the fret the tiny attachment spur was buffed off with a medium sanding stick and the exposed metal edge was touched up with a black Sharpie. The panels were then glued in place using GatorGlue which allows for adjustment in orientation of the kit part before the adhesive sets up.

Although the original raised detail will allow for a very nice representation of instrument panels once properly painted, the Eduard PE parts make the cockpits' appearance spectacular.

This is my second Tamiya Heinkel He-219, and the first one was built using an earlier edition of the Eduard Zoom set. The new EX 634 set is far and above the original in detail and parts. This set is a very nice addition to the Tamiya Heinkel He 219, and I highly recommend this product. I did not find the lack of adhesive on the back faces of the parts a deterrent to the installation, as I have found in the past the adhesive used by Eduard can be a bit too aggressive in its bonding to the kit parts and made minor adjustments in the placement of the parts a bit of a challenge.

I wish to thank Eduard and IPMS USA for the opportunity to use and review this product.