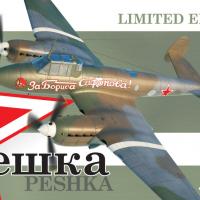 As a little background, the Petlyakov Pe-2 was a Soviet light bomber used during World War II. Pe-2s were manufactured in greater numbers (11,427 built) during the war than any other twin-engined combat aircraft except for the German Junkers Ju-88 and British Vickers Wellington.

Eduard continues their tradition of taking great kits and adding the “Eduard” touch with new decals, resin and photoetch upgrade parts. In this case, the 1/48th scale Pe-2 plastic is from Zvezda and resin tires (main and rear), propeller blades and spinners and an alternate glass radio operator window. There is also a large decal sheet which was designed by Begemot and includes markings for five planes:

Inside the box, there are 11 sprues of really well done gray sprues, 1 sprue of clear parts, one fret of PE and a second fret of PE colorized parts. There is also the resin parts and a masking set plus well-done instructions. The sprues have very fine engraving. There was a slight amount of flash- very slight and it didn’t affect but a few parts and was easily removed with a knife and sanding stick.

Starting with the interior, it is complete back to front for the plane and enhanced with many photo etched parts. With the large glass canopy and clear glass nose bottom allowing for the entire cockpit to be seen, this shows through with great detail. Eduard’s photo etched instrument panels are great and really show off the detail down to the dials. The same can be said for the radio operator’s area. All the connecting rods for the controls. Seat belts are also added to all seats.

There are a couple options at this point. First, there is a complete bomb bay. There is an option of open or closed doors and I elected closed as I like the lines of the aircraft with them closed. There is also an option of a closed or exposed left engine and depending on the markings selected, a choice of windows for the radio operator’s area. I chose the closed engine and chose these marking, Pe-2 later, 161th Guards Bomber Regiment, 2nd Guards Air Corps, Winter 1943/44, as I like the partial winter camouflage and the scallops on the nose/propellers- more on that later.

To finish off the interior and close the fuselage, I built the bomb bay and installed it as it contains the wing spars. I added all the interior detail leaving the gun out of the radio operators area as it can be added later (unless you are closing the windows. There are several large windows on the inside of the fuselage that must be glued into place. Add the masks first and get them glued tightly into place. I have included several pictures of the interior, so you can see the detail.

Once the parts were ready, the fuselage is glued shut and some putty is required on the top and bottom but minimal. I added the closed bomb bay doors and ventral gun area and some putty was needed but not much. The tails and horizontal stabs are added and fit very well. Onto the wings and I elected to close the engine so it was not needed to build it but I can say, it is a beautiful engine if you want to leave it exposed and is made from about 40 parts with supports and all. There are four air scoops on the front of the wing. Take your time with these as they are exposed at the wing front and need putty so the better the fit, the less the putty. Don’t forget to open up the holes for the external bomb rack or dive brakes. The landing gear and nacelles fit right into place with no issues. Adding the front cowlings took a little putty.

Most impressively, when I joined the wings to the fuselage, the fit was perfect. A slight whisper of putty and they were perfect. To finish the prep for painting, I added the cockpit glass bottom, the rear turret and masked the canopy and glued into place. Step 45 has you build a rather unique antenna that sits on the aft canopy. It is built from five PE parts and took some time to get into place and is very fragile. Fit is very good here also.

For paint, I used Xtracolor and did the bottom in RLM65 blue and the top in green, brown and dark gray per the recommendations. I used white and a Badger Sotar 2020 to replicate the white and let everything dry While drying, I prepped the resin wheels and propelled parts which are exquisite. And onto decaling.

This was a Tale of Two Cities- the markings for the plane are few with only nine going on as markings and national insignia and they reacted very well settling into the engraved. For the tulip pattern on the nose of the plane and the spinners, there are multiple decals with five for each propeller and two for the nose. I tried everything to get these to fit and they would not conform the spinner. I tried Microsol, Microset, Mr. Mark Softer and even Solvaset to no avail. They wanted to curl out instead of settling onto the part. In the end, I scrapped them which is a shame as it does enhance the scheme. When all the decals had dried, I flat coated the kit.

I weathered with pastels for the white and exhausts stain. I added the remaining parts and flat coated on kit one last time.

This is a great kit and fit is good to spectacular. The only difficulty for me was the spinner and nose decals. I would recommend that you have a few kits and some photo etch experience under your belt just due to the small parts but definitely a recommended kit of an important fighter.

My thanks to Eduard and IPMS/USA for the opportunity to review the kit.

Complete on Base 2
Previous Next