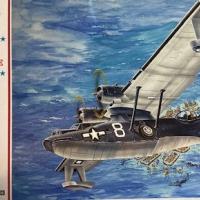 Atlantis Models has released a PBY-5A Catalina in 1/104 scale. This was originally a classic Monogram kit, which debuted in 1955. On the older model there was some issues reported with parts alignment, I found none of that with this kit.

The cockpit has only the upper half of a pilot and copilot no other detail for it.

Because there was no detailing in the cockpit and the waist gunner positions (they too had upper body figures only) I decided to paint those areas black and did not install the figures.

The fuselage has no panel lines, the only details are raised rivet heads throughout. On older model reviews (original model release) the fuselage locator pins would not line up. This new model does not have this problem. When the fuselage was joined the real difficulty for me was sanding the seam along the spine and preserving best to my abilities the rivet heads.

The nose gear was molded into the right side of the fuselage and has no detail. I was afraid that when I put the fuselage together that I would break off the nose wheel, I broke it off shortly after I put it together. I waited until I was done with the model then glued it back in place.

The fuselage has a built-in spike to the rear of the model, this is in place so the model would not be a tail sitter. I removed the spike and loaded up the front of the fuselage with enough weight to make it sit on the main and nose landing gear.

The wing went together without any problem, it was molded in an entire span with the parts being top and bottom. Like the fuselage, the only detail on the wings were raised rivets, no wing panels.

The wing tips were floats that are on the real airplane, they swung down to keep the main wing from leaning to one side of the other and impacting water. I chose to have the wing tips deployed in the down position.

The engines and cowling were molded together so when it was time to add them to the wing there were no issues. I painted the engine areas black to hide the lack of detail.

The gear consisted of struts off the side of the fuselage, these were the main landing gear and fit with positive locating holes in the fuselage. The nose gear was dealt with after the model was built.

The torpedoes were painted with AK real metals metallics Aluminum for the body and Brass for the tips.

There was one small sheet of decals, star and bars (two sizes) and stencil lettering and the number 8.The decals went on easily, and after the decals were applied I sprayed two coats of Mission Models Clear Gloss thinned with 70 percent of Mission thinner CP30, to blend the edges of the decals.

The model had molded outlines of decals in the plastic where the individual decals should be placed, this was new for me to deal with. I can see up close where a couple of the decals were a hair off from the molded lines but for the most part, they looked good.

Tamiya Black panel liner was used for the leading edges of flight controls. Other stains on the wing and fuselage were applied with Abteilung oils. Once the weathering was complete, I sprayed the model with a matt coat.

This model was an easy build. There was not too much in the way of parts to be cleaned or that did not fit. The lack of detail on the kit was a bummer, but I got over it because I knew it was an issue before I built it. I knew this was a very basic model and prepared myself for some issues building it that never really materialized. Now that the model is completed and painted, I like the way it turned out. With some love and care this model could be a nice little addition to any collection.

Thank you to Atlantis Models and IPMS/USA for the opportunity to review this model.