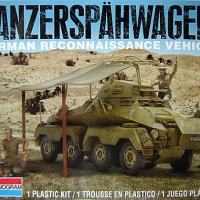 The Panzerspahwagen Sd. Kfz. 232 was one of many various types of vehicles with eight-wheel drive and eight-wheel steering used by armored reconnaissance units of the Wehrmacht and Waffen-SS. These armored vehicles were used in many campaigns in Africa and Europe during World War 2. The Sd. Kfz. 232 was noted for its medium range wireless set and frame antenna. This type of antenna was used until 1942 when it was replaced by a single pole antenna. Sd. Kfz. 232s were usually armed with a 2cm KwK 30 L/55 auto cannon capable of firing at a rate of 280 rounds a minute and a 7.92mm machine gun, both mounted in a single turret. A crew of four was typical. The commander and gunner sat in the turret, the driver sat at the front, and a secondary driver was emplaced in the rear of the hull. Powered by a 155 hp 8-cyl gasoline engine with a range of 186 miles and a top speed of 53 mph, it is easy to see why it was one of Rommel’s best long-range recon vehicles.

Featuring 145 parts, this 1974-vintage kit has stood the test of time, the parts well represented with sharply defined detailing. Molded in a tan colored plastic and sporting genuine rubber tires, the kit is a classic example of Monogram’s wonderful design team of yesteryear. Sure, there are a few sink marks, and it’s a 1/32-scale kit, but it still rocks and you can do several versions with the parts supplied. For the young diorama modelers, you have 3 crew figures, a tarp with poles, and a campfire. There are a couple open or closed hatch options and a detailed engine. Also, the two-decal options include a Polish campaign all-gray vehicle and an Afrika Korps all-sand colored vehicle.

This is without a doubt the most enjoyable armor build I have done to date. I spent about 6 hours in construction; all the parts just fell together without any noteworthy problems to mention. I spent less time doing the finish work, which included pre-shading, a color coat, a gloss coat, decaling, a wash, a dull coat, touch up, and clear parts (lens covers).

I cannot understand how this kit went by the review corps list twice. I volunteered for the opportunity to do the review on the 2nd last call list and then was selected. I got an email back from Dave saying “Was worried it may never go – an oldie to say the least.” Well, maybe an oldie, but definitely a goodie. I whole-heartily recommend this kit to anyone who would like a box of old-school fun at a bargain price.

Thank you, Revell/ Monogram, for releasing these modeling treasures. I humbly appreciate your time-tested kits. And thank you, IPMS.