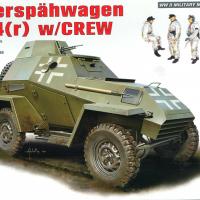 This kit is a re-box of the Vision model 35002 WWII Russian BA-64 Armored Car with new decals to depict a captured armored car in German service. Plus the addition of a MiniArt figure set that calls them the “crew”.

The “crew” for this armored car is 5 figures from MiniArt’s Figure kit 35021. There are 5 figures in this set, but they are not for this armored car. They are actually a tank crew in winter clothing for the 1943-45 timeframe. They possibly could be modified to fit the armored car, but that is beyond my capabilities. My suggestion to you is to take the figures and put them on a tank as they were intended and look for a more suitable set of figures for the armored car.

The color charts shows the reference numbers for Vallejo, Testors, Tamiya, Humbrol, Revell, and Mr. Color. The paint schemes and associated decals are as follows:

The decals are by Begemont and appear to be acceptable.

The kit will build a very nice, but small model. The “crew” is not for this model. They should be used on another tank kit as originally intended.