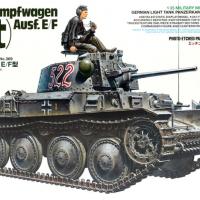 Bottom Line Up Front: Tamiya knocks it out of the park once more with a well detailed, brilliantly engineered ‘new tool’ kit of an interesting subject. The construction portion of this kit took me about three and a half hours to complete and I did not feel rushed.

The Panzerkampfwagen 38(t) was a pre-WW2 Czech design which compared favorably to early German armor. The German Panzerwaffe adopted the tank shortly before the outbreak of hostilities in 1939. The (t) stands for tschechisch, the German word for Czech. Pz. 38(t)s saw limited service in the invasion of Poland and France. The vast majority of the roughly 1,400 Pz. 38(t)s produced served on the Eastern Front.

There are certain bits on Pz. Kpfw. 38(t)s that cry out for competent detailing and Tamiya excels here. The suspension, commander’s cupola, cooling vanes on the machine guns (all areas where other manufacturers have stumbled) are all crisply rendered. The machine gun barrels did need to be drilled out.

There is interior detail on the commander’s and driver’s hatches. Tamiya provides rudimentary detail on the 37mm main gun breech and machine gun in case the builder wishes to pose the commander’s hatch open. The lettering on the jerry cans is very tidy and crisp and a nice touch. There is a small PE fret for the engine air intake. Tamiya did leave out any smoke pot detail on the rear engine deck. The link and length tracks are nicely detailed and require NO cleanup. The toolbox is molded with full perforations, not just indents. The vision blocks are all molded in gray plastic. Tamiya could have done better here by molding them in clear plastic.

Tamiya has really upped its game in the figure department. They supply a commander figure in a very interesting, super realistic relaxed pose. The detail on the face and hands is a little soapy but the uniform is just about up there with high-end resin figure manufacturers. I opted to substitute an aftermarket head from Hornet for this build but honestly, the one that comes with the kit is a-ok

Period photos of Pz. 38(t)s consistently show loads of stowage. There is already some good aftermarket resin available for this tank but it is designed to fit kits from different makers. I’m confident that with this release there will be more to come.

There was one small detail on this kit that bothered me. Some Pz. 38(t) had a rear view mirror with an armored shroud covering it. Tamiya simplified this part so that there was no mirror showing. To be fair, there are precious few original photographs of this feature. It took me days and a lot of help from fellow armor-geeks to find just one period photo taken from the correct angle. That being said, it’s a feature that, it seems to me anyway, Tamiya could have reproduced without too much trouble.

The only other very small issue was the lack of a radio antenna. There is a mount for one but no antenna.

We’ve come to take it for granted that Tamiya’s engineering is second to none. No surprises here. Tamiya has taken one more step away from the conventional tub hull construction with this kit, providing a flat-pack slab hull that comes in 6 parts. The commander’s cupola comes in 14 parts and makes clever use of vision blocks and armored parts to give a seamless assembly. Don’t let the seemingly high part count scare you though. It all goes together simply and intuitively. The road wheels come in one piece each. The suspension assemblies are just three pieces each. None of the detail on the running gear suffers from this simplicity. The drive sprockets are attached with poly caps which greatly aids getting the link and length tracks to attach properly.

The gun and each machine gun are posable. The turret machine gun is not linked to the main gun as a coaxial unit so it can move independently of the main gun. This is accurate to the original vehicles which operated the same way. The main gun sight and gun are linked however and move coaxially. I am notoriously ham fisted when gluing parts which are supposed to be moveable. The fact that I had no problem with either of the machine guns or the main gun should tell you that these assemblies are pretty much idiot-proof; at least this idiot.

The only seam on the model that needed to be filled and sanded was on the muffler. There were a few ejector pin marks and mold seams that needed to be sanded but all were well within the skills of even the most beginner modeler. The biggest cleanup job you will have is to sand off the mold seams on the wheels.

There were absolutely no fit issues with this kit. Nada. The clever engineering, combined with the perfect fit of each part and assembly made this kit an absolute joy. It took me about three and a half hours to complete all of the steps in the assembly portion, including the tracks, and I didn’t rush. The suspension and road wheels fit to such a tight tolerance that getting them all aligned straight (the great bugaboo with all tracked vehicle models) happened perfectly all on its own.

Tamiya gives you their standard, well thought out, well-illustrated, multi-lingual instruction sheet. They go the extra mile with a nice data sheet that gives you some historical background on the Pz. 38(t). There are 22 steps in the instructions but that’s only because they break it down to assembling only four of five parts in each step. It will be very difficult to get lost with these directions.

If this kit has a weak point it’s the decals. Waterslide decals seem to be Tamiya’s Achilles heel, which leaves me scratching my head since they have such high standards everywhere else. The decals have great color and are always in perfect register, but they are thick, thick, thick! Even if they nestle down over raised detail they obviously show as an adhesive mark from almost any angle. It’s very difficult to get that “painted on” look with Tamiya decals. A much better option is to go with one of the many available aftermarket decal sheets from companies like Kagero, which is what I did for this build.

This kit is an absolute winner. It’s not perfect but darn close and a complete joy to build. If you’ve hit a slump in our modeling and want a project that will “get your mojo back” this kit is for you. It’s an interesting subject with all sorts of aftermarket options already out there. I can’t recommend it highly enough.