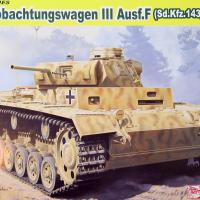 This is a multimedia kit comprised of 470+ styrene parts on 24 sprues, DS tracks, one photo-etched fret, decals and the set of instructions that need to be reviewed very carefully before gluing any parts together. The DS tracks are misshaped with the guide horns flattened, there is substantial flash on the side, and the locating holes to glue the ends together do not line up with the pins on the other end. I tried to salvage these by using the Hobby Trax forms to straighten the guide horns. Generally I was successful, but if your model is to be shown in a contest, I suggest that you replace the tracks with individual links (Magic Tracks or Fruil).

Most Dragon models today are a collection of old sprues with additional new sprues added to create a new variant. Dragon has done so with this kit, and you will have some sprues using the same letter but are called out on the instructions with a separate color (see sprues blue A & B).

Step 1: This step is the assembly of the idler wheel, drive sprockets, road wheels and return wheels. There are no problems here other than the removal of the mold line which is noticeable on the road wheels. You will need to choose the style of idler adjustment mounting you want to use. Both styles are not moveable, so you won’t be able to adjust the track tension.

Step 2: This step is the chassis build. There are six mold stubs on the top of the chassis tub that need to be removed. If you don’t remove these stubs the fenders will not fit.

Step 3: In this step you will insert the torsion bar suspension. The torsion bars retainers are mostly part A4, except for one at the front end driver’s side represented by part B18. You can attach the wheel arms using the premolded locating pins on the hull chassis, or you can cut them off, which will allow you to position the wheels for a diorama.

Step 4: This step is the detailing of the rear plate.

Step 5: This step adds the running gear to the hull chassis. No choices here. I left them off at this time for ease of painting.

Step 6: This step attaches the rear panel, which features the muffler (attached in step 4). The instruction photo shows a mounted smoke candle, but it is not called out and does not appear to be on any sprue. Just ignore this part.

Step 7: This step adds most of the on-vehicle tools and support brackets to the left fender. The photo-etched part MA9 needs to be glued in at this time; after you attach the fender you can’t get this part in. A subassembly for the fender, the rear fender extension and the locking clamp is added at this time. Make sure you add the locking clamps A26 and A25 (right side) before attaching the fender to the body. The wooden jack block is shown to be added here. You probably need to leave it off the model until close to the end so you can paint the two tow shackles that are stowed beneath it. The jack holding brackets are photo-etch only; there is not a plastic equivalent. Also, there is no jack to go in the brackets. If you want to show one, you will need to find it in the spares box.

Step 8: This step adds the on-vehicle tools and support brackets for the right fender. The photo-etched part MA10 needs to be glued in at this time; after you attach the fender you can’t get this part in. The instructions have you cut off the front mounting plates that are molded onto the front of the fender. I did not do this; I just added the missing parts from the extras on the sprues. I did this as a big blob is still left after removal and I think it distracts from the rest of the tread plate pattern. You could cover these with some stowage as an alternative. The rear taillight is called out as part A26, it should be G12.

Step 9: This step builds the rear deck cover. It has several misidentified parts to be corrected. The lifting hooks are listed as A10, they should be parts A63. The star antenna base is listed as J110, it should be J10. Parts K11 and K12 should be switched—just make sure the hinges line up with the mating hinges on the deck. Parts K16 and K17 also need to be switched. Part V48 should be V13 and part V49 should be V61. The subassembly picture for the tow-cable mounting brackets is correct; the call-out numbers for the individual mounts are incorrect. The two clamps are listed as V11, I believe they should be A4. I left off the star antenna till later to avoid breaking it off during the rest of the assembly.

Step 10: This step builds the chassis top. The lifting hooks are listed as A10, they should be A63. Don’t install part V58, the visor rain shield, as you will not be able to install the add-on armor in step 14

Step 11: This step completes the front deck. It directs you to drill out a mounting slot in part V40, however, those slots are already done in part U4, add-on armor, in step 13.

Steps 12 & 13: These steps complete the chassis subassemblies and see them mounted on the chassis. The towing brackets are misidentified, switch V24 and V25. Adding photo-etched parts MA5 and MA6 was a real puzzle. I found it was easier after the fenders were already installed. Part B27 was too short and did not reach. I replaced it with wire.

Step 15: This step builds the armored commander’s hatch. You can display it with the armored blocks either open or closed.

Steps 16 & 17: These steps build the gun mount and faux gun. The original gun was removed to provide more space for the additional radios, and a machine gun was inserted in its place, and a fake gun was attached to the gun mount so the tank would appear as if it was still armed.

Step 18 & 19: These steps build the turret. To install J5 or J6, you will need to drill out portion of the turret top. Make sure the hole is large enough for the J5 or J6 insert. If you show this part in the closed position, it needs to be almost flush with the top, because when you add the locking clamp J3 it needs to be horizontal—not on an angle.

Step 21: This step details the turret with the mounting of the stowage bin and placing the turret on the chassis. At this time I added the headlights and the star antenna. These instructions call for you to remove the lower mounting bracket from the stowage bin. Don’t do it. You will need that bracket when you glue the stowage bin to the turret. The star antenna is built from photo-etch and I don’t think its appearance is accurate. I believe they were made of rods, not flat plate. However, I made it from what was supplied.

The drawings found in the references listed below show the kit to be basically accurate. Since I’m not a rivet counter, I don’t go beyond that. I model for fun.

References for this variant are included in the following books:

I found the molding to be clean. There were no sink marks and few ejector pin marks. The mold seams were easily removed, and I saw no flash. Dragon makes extensive use of the pin nodes to keep ejector pin marks on the parts to a minimum. However, you will need to handle the removal and clean up of the parts with care.

As with all Dragon’s instructions, read them carefully and plan what you want to do ahead of construction. Check the fit over, and over, and over again to make sure that all items fit together.

The color call outs are for Testors Model Master enamel and Gunze paints. I continue to see a weakness in the painting instructions from all kit makers. Instructions for the small parts, like the pioneer tools and travel lights, are never listed or shown. Here you have to guess or mimic what someone else has done. The decals are produced by Cartograf and are up to their usual high standards.

This is a well-engineered and well-molded model. If you make sure that the instructions are correct, the model goes together very well. It is a good mix of styrene and photo-etch. I can recommend this kit to all WWII modelers.