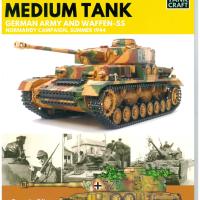 The Panzerkampfwagen IV (appropriately truncated to Pz.Kpfw. IV, Sonderkraftfarhrzeug 161, Sd.Kfz 161, or even better, the Panzer IV) was developed in 1937 with the Panzer IV Ausfuhrung (ausf) A, and was the most numerous produced tank in the German Army and Waffen SS in World War II. The Panzer IV had the ability to be upgunned and uparmored, allowing it to serve on equal terms with American and British tanks through the German surrender with the Panzer IV ausf J. After the war, Panzers continued to soldier on through at least the 1967 Six Day War, but that is a story for another review.

The Table of Contents (see accompanying photo) lays out the book in a logical manner with a truncated introduction of the omnipresent Panzer IV, then transitions to a general overview of the Normandy Campaign from the landings on 6 June 1944 through 30 August 1944 when the last German units crossed the River Seine, the Panzer IV units, camouflage and markings, and in a trend in this series, the Model Showcase and Products (pp27-49) break up the book before delving back into technical details and modifications, unit tables of organization and an extensive bibliography.

For modelers, there are ten pages of color profiles highlighting 20 different Panzer IVs. There are 18 pages of models covering four beautifully built models and five pages of covering model manufactures that produce Panzer IV kits; a total of 32 pages, half the book. The rest of the book has 100 black and white period photographs from both German and Allied lenses. The Technical Details and Modifications section provides enough information for all but the most discerning Panzer IV aficionados wanting to learn more about the Panzer IV variants in northern France.

Almost half of the German tanks contesting the Allied invasion of Normandy were Panzer IVs, a majority of which were the ausf H and early ausf J models. Over 7,000 Panzer IVs were built, and this book does a great job presenting its huge role in Normandy. If you want an easy-to-understand history of the Panzer IV in this campaign, inspiration to build a model of this German workhorse, or just want to enjoy great illustrations, this is a good book to start. I know Panzer IV, Medium Tank, German Army and Waffen-SS Normandy Campaign, Summer 1944 will be on my bench when I build my next Pz.Kpfw. IV ausf H or J.

Profuse thanks to Pen & Sword (https://www.pen-and-sword.co.uk/) and IPMS-USA for providing the review sample.