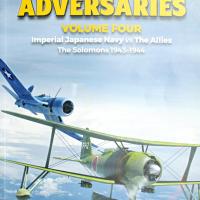 The author, Michael John Claringbould, developed an acute interest in documenting WW2 South Pacific wrecks after getting no answers about the WW2 plane wreck on the hill next to his grade school in Port Moresby, PNG (Papua New Guinea). He carried a wingtip home and from his photos it was identified as a P40E Kittyhawk A29-109. His life afterwards has been devoted to bringing to light the largely forgotten South Pacific theatre airplane wrecks. This includes documenting the Japanese side too, something most Anglocentric writings have little to no details about. That is a key difference between his books and others of WW2 South Pacific history. Michael has long been searching and finding aircraft wrecks in the area and is president of Aerothentic Publications. His doggedness had him learn Japanese and dig up official Japanese records, on par with what is available for the victors (USAAF, USN RAAF). This type of reciprocal detail is seldom seen in WW2. Michael is a pilot and restorer, a member of the Zero Fighter Pilots Association, and consults on many missing person/aircraft searches. He has made himself the ace of WW2 South Pacific military history. Michael has amassed numerous books on WW2 South Pacific aerial subjects, including several series on aerial warfare in this sector, plane vs. plane, and the US Fifth Air force – everything you always wanted to know about WW2 South Pacific aerial warfare from a balanced and authoritative viewpoint.

Casemate Publishing is offering the latest installment in the Pacific Adversaries series of Avonmore Books by Michael J. Claringbould – Pacific Adversaries. Volume Four. Imperial Japanese Navy vs The Allies. The Solomons 1943-1944. Volumes Two & Three have been previously reviewed by Bill Kluge, and we reach the same conclusions. You get a softbound paperback book, 9.84 X 6.93 inches, 112 pages. Volume Four has About the Author, Introduction, Chapters 1-15, Acknowledgements, and Sources sections. 19 Color profiles of aircraft highlight each Chapter, along with six color plates, 4 color photos, 56 B&W photos, eight maps and one Table.

You can see Michael’s other books in the About the Author section. Pay attention to the Introduction – it has an overall area map to put the places in the Chapters in perspective. Importantly, it also contains a Glossary and Abbreviations. This part is crucial for understanding more about the Imperial Japanese Navy Air Force and its administrative and personnel order, something skimmed over everywhere else. Abbreviations are used throughout the text, so this resource is essential for knowing who is what. There is also information about the Japanese aircraft types, including kanji terms.

Remember the two-season Baa Baa Black Sheep / Black Sheep Squadron TV series with Robert Conrad as Major “Pappy” Boyington (1976-1978, still on H&I)? Pacific Adversaries Volumes blow away the subjectivity of the American viewpoint. This Volume and its sister Volumes are highly accurate and detailed mini-stories of individual missions or days that provide a you-where-there feel for aerial combat in the South Pacific Solomons front of WW2 in 1943-1944. Well-illustrated with unusual photos and superb color plates enhances the experience and makes this book a reference for modelers building planes of this period.

The author also names names and takes tail numbers. In other words, you know exactly who was shooting at who and the outcomes. Knowing more about who the opponents were humanizes the battles and makes them more interesting. Also, the author does not pull any punches when things go wrong or were conducted stupidly – you get a dose of reality with this volume that clear up failures and successes and why.

This book is different from other histories of this theatre – you get to see the Japanese side of the story, in detail. Michael has been courageously objective in comparing records from each side to end up with the real story about what happened. You will see how claimed victories were greatly exaggerated by both sides, and that the outcomes were fairly even in terms of losses, except for pilots. Most Allied pilots that crashed or were shot down survived to fight again, but lost Japanese aircraft had almost no survivors that returned to duty. The attrition rate for the Japanese is illustrated carefully, and compared with the burgeoning US/Australian presence.

Each chapter is a vignette that can stand alone as a story. This makes Volume Four a fast and easy read. The multitude of photographs and excellent color drawings are top-notch and can be used as reference for modelers building planes of this period. Where possible, the actual aircraft discussed in each chapter are illustrated or shown in photos. Recommended if you want accurate facts of little-known events, are a WW2 aircraft buff, model WW2 South Pacific aircraft or just want to know what it was like to fly in that place at that time – as a Japanese or American airman.

Thanks to IPMSUSA for the privilege of reviewing this helpful book!