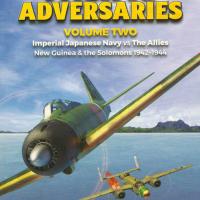 In this second installment of John Claringbould’s accounts of aerial combat between Japanese and Allied air forces, here he presents Japanese Naval Air Force operations in the Solomons and New Guinea from 1942 to 1944 (Vol. 1 covers Imperial Japanese Army Air Force engagements in New Guinea during the same period). The author takes a unique approach in presenting these accounts, providing insight for individual encounters through the eyes of each protagonist based on thorough research of each side’s official records, eyewitness testimony, personal narratives and diaries, and on some occasions evidence obtained from wreckage discovered years after the events depicted.

Instead of being an overview of the Solomons and New Guinea campaigns, each of the 15 chapters covers a particular engagement where good documentary evidence is available from both sides. While some of the stories cover well known events, such as the heavy 5th Air Force raid on Rabaul on November 2, 1943, many of the stories describe lesser known engagements, such as the first nighttime interception of RAAF Catalinas over Rabaul by Claudes and Zeros in February, 1942, or an unusual combat four months later between two reconnaissance aircraft - an RAAF Hudson and a Japanese four engine Mavis flying boat. His research often debunks the overzealous “kill” claims of each side by comparing the official mission records of each participating unit. Several of the stories provide follow up information highlighting the participants postwar lives, shed light on cases of disappeared aircraft or airmen, or efforts to retrieve and return remains to families.

Each chapter is accompanied by several profile illustrations of the aircraft involved. Altogether nearly 50 individual aircraft are shown, most with a single left side view, but several with three views (front/top/side). The book is lavishly illustrated with period photos, some in color, as well as several from more recent expeditions to find and/or recover aircraft relics in the swamps and jungles of the New Guinea and the Solomon Island battlefields. Also included are a number of illustrations depicting the events described in the narrative.

Michael Claringbould is a well known Australian writer and historian, having grown up in Papua New Guinea near Port Moresby. He has assisted MIA recovery teams from the US and Japan, and has provided research assistance and accompanied aircraft wreck discovery teams in New Guinea and the Solomons. He is also an exceptionally competent digital illustrator, providing all the illustrations and profiles in this book.

This small volume provides an excellent cross section of visual and written information describing  combat between the Japanese Naval Air Force and Australian and American Navy and Army Air Force units in the South Seas area during the first two years of the Pacific War. Thanks to Casemate Publishing and IPMS for the opportunity to review this excellent book.