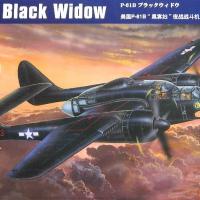 A sincere “THANK YOU” goes to our friends at MMD for providing this most excellent combination for IPMS to review… This was the build of the year for me.

This was a truly pleasurable effort on many levels. First, the size is agreeable… I’m getting older and if a kit is larger it’s easier to work with. The only drawback is where to put it! (The office wins again; most of my IPMS builds are given to the folks there… Most are VERY appreciative, as they can’t do it themselves). Second, I have not built a 1/32 kit like this in quite a while. I never worried about breaking the basic kit because of my ham-fists… Engineering is first rate!

The kit has over 400 parts; if the number excites you like a jigsaw puzzle, buy the kit, because you’ll be busy. If you want a 1/32 spider, buy the kit! Judging by the “out of stock” level, many have… Let us go over the highlights…

It’s a 1/32 P-61. Up front, I got over the online pundits whining about inaccuracies because I like to build and the P-61 is a cool aircraft. Rivet detail is excellent; overall detail is also a plus. For our friends at Hobbyboss, don’t be discouraged by the naysayers, because you have provided us modelers a most fantastic product. Fit is a major plus, particularly with the scale. I anticipate a lot of conversions for the F-15 reporter and interior, new engine gearboxes, etc… the kit’s gonna be worth it. Now, let’s address the minor parts to get it over with:

A note on colors; Dana Bell on Hyperscale has addressed AAF colors. His notes were used throughout the build, as no color information is provided for the interior. Here you go:

I really enjoy the construction of a good kit, and this one hits the mark. Engineering is great, the parts fit without much extra cleanup required, and in the end you can pick up the model by the wings and not worry about cracking a seam.

Beginning: Interior of course. This kit impresses as one where additions would be worthwhile, but not necessary. I used the kit instrument panel, painted the interior parts as they came from the kit, and made do; the gunner seats were impressively detailed, and the multi-part sight controls for the turret need no embellishment. One thing I really liked was the flexible, liquid-cement friendly flexible plastic oxygen hoses and environmental duct running through the cockpit; also on this fret were ammunition belts and urinal horns/hoses for the forward and rear cockpit. I used a set of Eduard B-25 seat belts to replace the kit ones; these worked very well as the pilot seat apparently did not have a shoulder harness and the Eduard set had just the right number of seat harness and shoulder harness. What is missing from the front office are most of the throttle, pitch, and mixture control levers; the fire extinguisher has a separate diffusion horn and looks great, Depending on the agent, the extinguisher would have been either a gold/brass color for CB (chlorofluorobromethane) or red for CO2 (Carbon Dioxide); I went with the CB colors just to be different. We then move to the rear gunner/radar control operator position. This is where you will spend a LOT of time….

The previously mentioned PE radio racks are very well done; if you have not learned the art of annealing metal and bending, you need to practice on something else first… As to the radios and radar equipment; spend a bit of effort and you will be rewarded with an interesting panel assembly. I don’t know what the cylinder is in the port side well, but it looks like a heater.

Moving back to the forward cockpit, you have sidewalls with a lot of excellent detail including thermos bottles. The forward wheel well is next; I left off the nose entry door and ladder until the end of the build.

Continuing on with the instructions are the lower cannon and ammunition feed belt assemblies. These are well detailed and everything fits in place. And now: time to fit the interior between the sides! This is frequently a make or break item on a kit; fortunately all fits without effort. The enclosed nose weight fits nicely into the forward fuselage…. At this time you also build and insert the aft swing-arm light in the aft compartment.

Radar is next; the whole assembly is very detailed. More nose weight is included in the form of two cylinders made of metal; use them or have a tail –sitter. This is a very ingenious idea; using heavy metal for kit parts. Well done Hobbyboss!

You can now attach the transparent upper fuselage and the radar to the fuselage; since this is the “A” model, you will have the ability to either leave the nose translucent so you can see the radar, or paint it. Next step is the upper turret assembly; this is for the moveable early turret, with four .50 cal.guns. Options include plain or vented barrels; again, your choice. This is once again a very detailed assembly, perfect for diorama work. The assembly includes the entire turret mechanism and ammunition storage “barrel” below the guns.

We move now to the clear canopies. No Future required; clarity is perfect and everything fits in place. Take your time and you won’t have to fill the seams around it. Again, excellent kit engineering is the norm. Roll the pod over and install the cannon covers, or leave them off, your choice.

Now for the challenging portion of the kit: the engines. These are hyper detailed, ostensibly so you can see them through the transparent cowling. Each cylinder bank has three-part, separate valve head covers with crossover oil tubes, and cross-cylinder oil drain tubes. The intake system tubing and exhaust collector are catered for, but there are no exhaust pipes. The accessory gearbox assembly is also included, along with the downdraft (mounted on the top) carburetor. Here the pushrods are also well detailed and fit like a glove. No ignition harness is included; this would have been a better option for the photoetch rather than the spoilers, IMO, as this omission is VERY visible. Adding wiring will be easy if the model is not assembled.

The engine mounts fit together and into the mount ring on the engine as they should; the problem is there is no positive location for them. Remember the carburetor fits on top; that’s your keystone point. As to the forward gearbox, I don’t know if it’s accurate or not; having built the 1/48 Great wall P-61 kit, and all the aftermarket corrections that were released soon after, I think the HB kit missed here. In order to properly arrange the governor, magnetos in the “upper” position, and all that, you will have to remove the key tabs on the engine and gearbox to line everything up properly. Otherwise, the parts key with the Mags in the incorrect down position. I thought it was me, but the second engine proved otherwise.

Next step is the engine booms and main gear wells. These are a high point of the kit. Make sure you have L2 bulkhead where J4 is shown installed; they are reversed on the instructions. The wings are next; take your time with the PE intake flow straighteners. They go in very well… but again take care while folding or you’ll have a mess when they work harden and fall apart if you mess up the fold direction. The wing spars adds full rigidity; use them. The intake ducting needs to fit with the intake horn facing down. I talked about the spoilers already…

The rest of the assembly is pretty straightforward; just try to keep an eye on the dihedral coming out of the centerline pod… Mine looks a little too high, but maybe my Mark 1 eyeball is off. Cowl flaps can be installed open or closed; the problem is the exhaust detail is not there, nor is there any actuating system for the flaps. I used the closed version for simplicity. The ailerons, elevator, stabilizer, and rudders are basic two-part items. Props are positive fit items; again, like another kit previously mentioned, I expect aftermarket items to show up as there are no prop mounting bosses in the HB kit prop bases…

Final assembly brings it all together; unlike other twin-boom kits, if you take your time you will have a great looking model. I recommend wings to booms, wings to centerline pod, using the stabilizer as a key point. The Stab fits tightly by the way, so be forewarned; use plenty of liquid cement and it slides in nicely. Exterior antenna and pitot tube are self-evident; the underpod antenna appear like 2x4’s but I don’t have a reference. The nose antenna are delicate and fit perfectly.

Main gear is the last thing I put on; these are metal with plastic details and are functionally sufficient to hold the weight of the model. No brake lines are included, so you’ll have to make those.

The very last part of the build was the painting; I used an acrylic lacquer car gloss black spray over black primer for economy; once it dried over night, I decaled and gloss-coated. I’ll worry about weathering later… along with the aforementioned wing walk corrections.

I was fortunate also in Squadron providing IPMS a set of their new wheels and tires for this kit. Let’s just say they are fantastic. Comprised of separate wheel assemblies with tires, they take a bit of time and care to build, but are worth it! You have to carefully remove the flashing from behind each wheel, which then are attached to a hub assembly. You will also have to carefully sand down the wheels to fit in the tire recesses… Paint the wheels and tires separately, then fit everything together… Match drill the hubs to the axles, fit in place with either epoxy or slow superglue while the model sits on the flats, and you are done. The kit tires are hollow vinyl, and will over time will undoubtedly flatten out with the weight of this kit. Not so with the aftermarket; The Squadron wheels have the proper see-through effect; and the brake lines are on the main gear hubs. See the pictures… and there are proper tire manufacturing lettering on the sidewalls. Well done!

At the end of the day, you will have a huge spider on your workbench… I highly recommend this kit to all widow lovers. Thanks again to MMD for the whole package. IPMS is better for your continued support!

The kit is great.  Every part goes together well.  However, the decals are worthless.  Good thing I had plenty in my "stash".