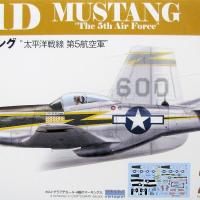 History: The North American Aviation P-51 Mustang is an American long-range, single-seat fighter and fighter-bomber used during World War II and was originally developed in remarkable time of 102 days in response to a request from British Purchasing Commission. The first P-51s with Allison engines were not able to show stunned high performance. By replacing Allison Engines with Rolls-Royce Merlin Engines, P-51 became a high-performance aircraft and evolved into long-range bomber escort in European War and was rival for Japan Army in Pacific War. D-version of P-51s were produced in larger numbers than any other Mustang variants. The P-51D featured a bubble canopy for all-around visibility and was armed with six wing-mounted 12.7mm caliber machine guns. Wing racks allowed the carriage of drop tanks to extend range or bombs for ground attack.

What’s in the box: Upon opening the box you should find a clear bag with two sprues of grey plastic with a separate bag of the two clear sprues inside, a very nice decal sheet and instruction fold out.

Construction: 6 steps are involved with building this kit starting with the cockpit, fuselage and horizontal stabilizers. I decided to paint some seatbelts in to make it look a little better. Step 2 is the wing assembly and it’s the only area I had an issue with. You are required to drill the holes in the lower side for the external tank mounts. No problem there but there are two holes in the wing already. Those are for the M-10 rocket tube used in another boxing of this kit. Since the instructions do not mention or show these, remember to fill them in……I forgot to!

Step 3 is the assembly of the wing tanks, landing gear and propeller…………….YES you have to build a 1/144 prop! Everything fit pretty good here, but I left the propeller blades off until after painting as it was easier for me.

Steps 4 & 5 are the wing to fuselage assembly and the addition of the landing gear & doors, wing tanks, canopy, exhaust and radiator inlet and outlet flap.

Finishing: I used Alclad Aluminum on one aircraft and Tamiya Bare metal silver on the other and both look OK to me. You are given marking options for 4 aircraft in this kit.

All are in NMF, so painting is simple. I chose to do C and D and the decals worked like a charm. The only area I needed any decal solution was on the green anti-glare panel on the cowl.

Conclusion: All in all, these were very easy to build AND a lot of fun. These are very nice little kits that go together quite easily, and I recommend them to any modeler though younger modelers may have an issue with the small parts.

I would like to thank Platz for supplying this and the review corps for letting me build them.