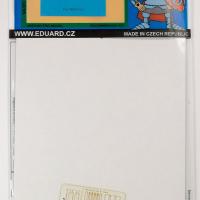 In fitting with the rather lavish nature of Tamiya’s 1/32 P-51D Mustang, Eduard, known for its photo etch (PE) parts, has released a set of actual fabric seatbelts to spice up the prominent office of the bubble-topped Mustang. Tamiya’s Mustang kits feature a very solid sheet of PE that contains a multipart seatbelt assembly, but they do not match the level of detail provided by these fabric belts. (Additionally, many reviews have recommended annealing - heat treating - the Tamiya PE belts to make them easier to position in the first place, and manipulating the thick PE belts will likely cause paintwork to flake requiring a paint job “in place.”)

Eduard’s fabric seatbelts come on one raw linen colored textile fret with a paper backing along with a single fret of silver PE fittings. The fabric belts are very sharply cut out and feature subtle “stitching” along their face. There is a subtle texture to the belts, but no overscale weave on the face of the fabric belts, which was my initial, yet unfounded, worry about these belts.

Detailed instructions are provided for those of us working with fabric parts for the first time. The basic steps are to remove the fabric belts from the “sprue” and peel off the backing paper, thread them through the PE fittings, and then fix the belts and fittings together with superglue. The instructions call for crumpling and kneading the belts into a small ball before adding the fittings, however I found this step to be unnecessary and it caused rather overscale creases in the fabric.

The actual act of threading the fabric straps through the fittings is the only difficult part of the assembly, but tweezers and a steady hand will make quick work of the job. A great strategy I found was to leave each PE fitting attached to the PE fret until after the fabric has been threaded. This is especially true for the small adjustment pull tabs. If you remove the fittings beforehand, a small set of pliers will help hold them steady, but be careful not to launch the fittings across the room as there are no spares provided.

Once the belts have been threaded, the fabric parts attach solidly to each other with superglue. The ends of each seatbelt are looped around a PE buckle or anchor bracket, and then secured to itself with superglue. There are a few small bends required on the PE buckles that are easily accomplished with tweezers.

Attaching the finished belts to the kit’s seat can be accomplished with either superglue or regular white glue. I chose to use white glue to attach the straps as it was more forgiving in allowing for some minor adjustments of drape and position against the painted seat. The finished belts were very easy to manipulate into a realistic “hanging fabric” position with some prodding from a toothpick, although they will require glue to keep the desired position as they have some natural rebound.

The fabric belts have a subtle linen color to them, easily seen when compared to the bright white of the back of the fabric. Over the course of handling and assembling the belts, they seem to darken a bit from the natural oils on your fingers. The instructions advise gloss coating the belts, and then using a very thin oil wash to bring out detail and add coloring, followed by a flat coat to seal the oil wash. I was happy with the look of the belts once assembled, and chose to skip the oil wash entirely.

Although one might think that real fabric seatbelts could be a bit of a gimmick, I was very impressed with this product. The assembly of the fabric parts was very manageable in 1/32 scale and the real metal fittings pop against the fabric in a way that wasn’t achievable with my skills using the stock Tamiya PE belts. Despite being recommended for the Tamiya P-51D, there is nothing preventing these belts from being used in any 1/32 Mustang, and perhaps other WWII fighters. I highly recommend these belts; they feel like a special treat for an already wonderful kit!

My thanks to Eduard for providing this seatbelt set and to IPMS/USA for the chance to review it!