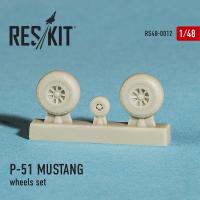 Fans of the P-51 will tell you that there are four basic tread patterns that one will see in historical photographs of the aircraft. There are tires with tread that are oval, block, diamond, or octagonal. Looking at the images that accompany this review, one can easily see that the tread pattern on the Res Kit wheel set is modeled after wheels with a “diamond” pattern. The modeler may ask if that tread pattern is the “correct” pattern for the aircraft they are modeling, and the simple answer is a bit “yes”. My research into which tread pattern would be “correct”, or at least appropriate, indicated that while the P-51B and P-51C most frequently are seen with wheels featuring the “block” pattern, it appears that there is not a consistent match between any particular variant of the Mustang and the tread pattern for the tires that were mounted on that Mustang. Perhaps particular production lines for the Mustang mounted a specific tread type, but those who study such things today indicate that as tires wore out, they were replaced by any tire that would fit, regardless of the tread type. It seems the overarching rule was, “if the shoe fits….wear it.” So, even if a photo of a Mustang shows one particular tread pattern on the aircraft, it could be that within weeks of the photo being taken, replacement tires were installed with a different tread pattern. Even more interesting is the fact that it was not uncommon to have tires on a Mustang had tread patterns that did not match. One tire might have a “diamond” pattern while its partner on the other side of the fuselage had a “block” pattern. Res Kit’s wheel set, therefore, is a valid choice for any Mustang variant you wish to build.

The wheel set includes a tail wheel, two tires for the main gear struts, and four “rims”. While removing the resin bits from the casting blocks to which they are attached, it is important to try to avoid creating a flat spot on the tire’s tread. A small hobby saw will do the trick nicely. In fact, I cut one of the tire loose from the casting block with a UMM saw. It took about 20 seconds and did not scar or damage the tire. Each tire is cast as a single piece and there are no “seams” on the tires that will need to be removed. The point at which the tire is attached to the casting block will mean that the diamond tread pattern along that attachment point will need to be scribed into the tire, or one can simply make sure that the tire is attached to the gear strut so that the former attachment point is now “face-down” so that it is not viewable. If you are one of those modelers that likes to “flatten” a tire just a bit then that attachment point is a good place to “let the air out” of the tire.

Pay attention to the four rims and the detail that is molded into them. All four rims are, of course, not the same. Two rims will be on the inboard side of the tire and two are designed for the outboard side of the tire. Just look at the kit parts being replaced with the Res Kit parts and that should help with proper placement. It will be necessary to drill out a hole on those rims to accept the “axle” on the gear strut when attaching the wheels to the kit’s gear strut. Centering that hole will, of course, be very important so take your time.

A note about pricing, RES KIT is located in the Ukraine and ordering from their website will entail a shipping charge. But then, that is also the case if the item is purchased from other online suppliers. When visiting the Res Kit website be sure to select the English version of the site, assuming, of course, that English is your language of choice.

This product is highly recommended for its economical pricing, high quality of molding, lack of seams, flexibility (can fit any 1/48th P-51 kit) and ease of use. Thanks to Res Kit for providing this product sample to IPMS for review.