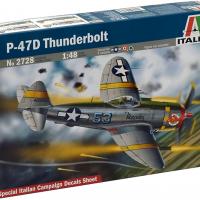 Italeri’s P-47D in 1/48 scale is re-boxing the well-known Academy P-47D. If you visit different websites (including Italeri’s), you will see “Photo-etch parts” listed as a part of the kit; however in my review sample the photoetch part was not included. I actually think it is an error on the websites, as there is no reference to the photoetch fret neither in the box nor in the instructions.

Once you open the box, you’ll find 5 sprues, plus an extra sprue for the clear parts. There are several options for underwing stores: bombs, drop tanks, bazooka rockets, and HVAR rockets. Just be aware that some of them are for the P-47N and not applicable to the –D mark. You also get an excellent decal sheet with a great selection of markings, two USAAF NMF, plus French and Brazilian markings in Olive Drab over neutral grey, all of them serving in the Italian Front from 1944-45. Stencils are provided for one model.

Invariably, construction begins with the cockpit, which is made out of 8 parts. Take your time and paint it carefully and you will be rewarded with an interesting looking interior. Seatbelts are provided as decals (not photoetch, as implied in the marketing materials).

Then I moved to the fuselage and that is where I hit the first glitch. The fuselage halves would not match each other on the top seam, between the canopy and the cowling. I discovered the problem while test-fitting the parts, without the cockpit in place, so the gap was not due to interference of the interior parts. The molded parts would simply not seat flat against each other. Both fuselage sides have a small “curve” to them. Maybe the sprue was removed from the mold before it cooled down or maybe it is a problem with the mold itself. I am not sure. Luckily in all painting options provided the top fuselage seam will be olive drab, which allows for better hiding of seam work than a natural metal finish.

Moving to the lower fuselage most of the seam itself disappeared under a bead of liquid glue, due to the very good fit of the parts. Light sanding and polishing was the only thing needed. However there is a noticeable gap in the super-charger exhaust area. The best solution would be to cover it with a scratch built part and install it before gluing the fuselage sides.

Moving onto the wings, you get the option to show the gun bays open or closed. I choose not to have open panels in my model, because whenever I have an open panel, I always end up either losing the panel or knocking it off the model.

There is an issue with the wings fitting the fuselage. The lower wings seem to prevent the top part of the wing seating neatly against the wing root. I had to file, fill and sand to fix the join. While working on the wings, there is a seam running along the wheel well that is virtually impossible to fill without obliterating all the surrounding detail.

Due to the work on the wingroots, I decided this model was not a good candidate for a natural metal finish. A pity, as the NMF decal options are great. I went with a pre-shade/post-shaded Olive Drab over Neutral Grey and Brazilian Air Force markings, as the “Senta a Pua” squadron has been in my “want” list for quite some time.

After the typical coat of Future, I’ve applied the decals. They are really nice, being opaque, glossy and thin. They conformed to the surface curves with the help of two applications of MicroSol. The only thing I would suggest is to make sure you have water temperature in the warm to hot range, as the decals had a hard time releasing from the backing if the water was tepid.

I’ve weathered this model with an enamel wash and I’ve painted the ordinance RAF Dark Green. I just wanted to “fool the eye” and make the olive drab to look a bit more weathered than it actually is, by using a darker shade of green in the ordinance. The last step of the assembly was to install the clear parts, and the fit of them is outstanding.

I’ve used the SAC aftermarket landing gear in this review. The details of it are available in the elsewhere in the website.

In summary, this model has some fit issues, but no problem was insurmountable nor beyond the capabilities of an average modeler. I’m just giving a heads-up of where you might run into a couple of glitches.

This is a good model for a modeler that doesn’t mind practicing his or her modeling skills and wants to take advantage of the outstanding decal sheet. I will be using the extra markings of that decal sheets in other P-47Ds in my stash.

I would like to thank Model Rectifier and IPMS/USA for the review sample.