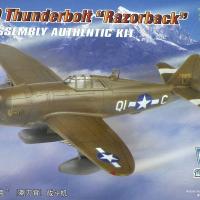 Considered by many the best American close air support fighter of the Second World War, the P-47D Thunderbolt was instrumental in the Allied ground campaign in the European Theater of Operations, as well as a key to ensuring air superiority and providing air interdiction in European and Pacific theaters.

Hobby Boss steps up with another addition to its fantastic “Easy Assembly” series of 1/72 aircraft kits in the form of the “Razorback” variant of the P-47D. Molded in 3 light gray sprues and solid wing and fuselage segments, a single clear sprue, a small sheet of decals for 2 markings options, and instructions with full color paint and marking guide, the contents of the little box offer a gold mine for modelers of all skill levels.

My 7 (and “a half”) year-old, Camden, was at the helm on this build, with Dad lending close parental supervision. The 30-some parts fall together cleanly and quickly. Landing gear and engine detail is more than sufficient for this scale. Cockpit detail is a bit sparse but suitable, given the birdcage canopy, with the instrument panel provided in the form of a decal. Single-piece fuselage and wing sections eliminate traditional seam lines, but the engineering of the interface for those segments provides and unorthodox seam along aft fuselage panel lines just forward of the empennage. Camden opted to skip the seam-filling step, and after paint and decal application, it appears to have been a good call since the seam is all but hidden. External stores options consist of tanks only – a flat centerline and a pair of teardrop wing tanks. Camden assembled all, but only used the centerline on the finished build. Overall, assembly took less than a couple of hours, and could’ve been accomplished in probably about an hour with a bit more focus.

Of the 2 color and markings options – 8th Air Force Olive Drab over Neutral Gray and Southwest Asia Natural Metal with Olive Drab anti-glare and black wing and fuselage ID bands – my little modeling wingman chose the more complex of the two – the natural metal one.

Not quite ready to introduce the lad to Alclad, we pulled down the rattle can of Testors Silver and let the little guy have at it. Once the silver had cured, he masked the anti-glare panel and spine (under duress, I might add) for the Model Master Enamel Olive Drab (FS34087), which he applied with Dad’s airbrush. After a long cure of the OD, he got his first lesson, again under duress, for masking the ID bands with Tamiya Tape. Again, airbrush training – this time with Polly Scale Flat Black.

Once the tape for the ID bands came off, he could see the end of the tunnel and really got the bug to get decals applied. So, eager, he chose to skip gloss coating the matte ID bands. Fortunately, the decals were thin and went down very nicely without any silvering using the MicroScale system.

After the decals had set for a couple of days, a few minutes were spent affixing the landing gear, centerline tank, and prop. Mission accomplished!

Camden loves the Hobby Boss Easy Assembly series – period – with this Jug being no exception. What is there not to love? They’re affordable, nicely detailed and reasonably accurate in scale and features, and they go together beautifully with little-to-no fuss and minimal parental supervision (unless being built for a review). Instructions are clear, painting guides leave no ambiguity, and the decals are excellent. As a dad wanting to share and foster the hobby with his young son, I love this series, too – and was thrilled when he asked to build one of my favorites, the P-47.

It’s evident that we give a “two thumbs up” rating to Hobby Boss’ little 1/72 P-47D “Razorback,” with our highest recommendation for this kit for young or beginning modelers, as well as for experienced modelers looking for a quick but attractive slammer to move across the bench and to display quickly.

Thanks to Squadron for the review sample and to IPMS/USA for the opportunity to share our build experience.