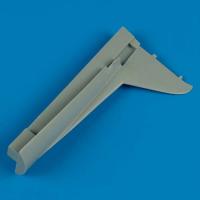 The latest addition to the Quickboost line of resin accessories is a dorsal fin conversion for the Tamiya P-47D Thunderbolt. The first P-47s had a “razorback” canopy configuration with a tall fuselage spine behind the pilot which resulted in poor visibility to the rear. The British came up with an idea to use bubble top canopies on some of their aircraft to fix this problem. The USAAF liked this change and started to implement it to their fighters which included the P-47. To fit the bubble top canopy to the P-47 they cut down the rear fuselage which was found to cause yaw instability. To fix the yaw problem they introduced a dorsal fin extension in the form of a narrow triangle running from the vertical tail plane to the radio aerial. This change was also implemented in the field on earlier bubble tops. This is where the Quickboost part comes into play.

This piece is up to the usual Quickboost standards. It is molded in a whitish resin which is smooth and bubble free. Because this piece is a little longer than I was used to I had a little trouble removing the mold block. The bad part is that I actually broke the piece in half. The good part is that it was a clean break and it glued back together nicely. They recommend using the Tamiya kit and after checking out some of the P-47s in my stash I can see why. Tamiya is the only one that molds the rear of the spine as separate pieces. The Tamiya piece is two halves that need to be glued together while the Quickboost part is molded as one, which is a plus.

I would recommend this part to people that have some experience in doing modifications to their kits. This piece is not a drop in and a little bit of cutting is needed. There are guides on the top of the back to fit the original part and they will have to be removed, I used my hobby saw and just sliced them off. Also, there is a stub that is supposed to fit in the bottom of the back of the part. Quickboost has molded their part with the slot for this but it isn’t deep enough and it was a lot safer cutting down the stub than trying to make the slot deeper. The Quickboost part does go on nicely and I only needed a little putty to fix the seam line. Finally, to connect the kit rudder to the resin piece there is another stub that will have to be removed to make it fit.

I highly recommend this product if you need to do a late P-47D. Just remember that these are not just drop in accessories and do require a little extra work to install.

Thanks to Quickboost and IPMS/USA for the chance to do this review.